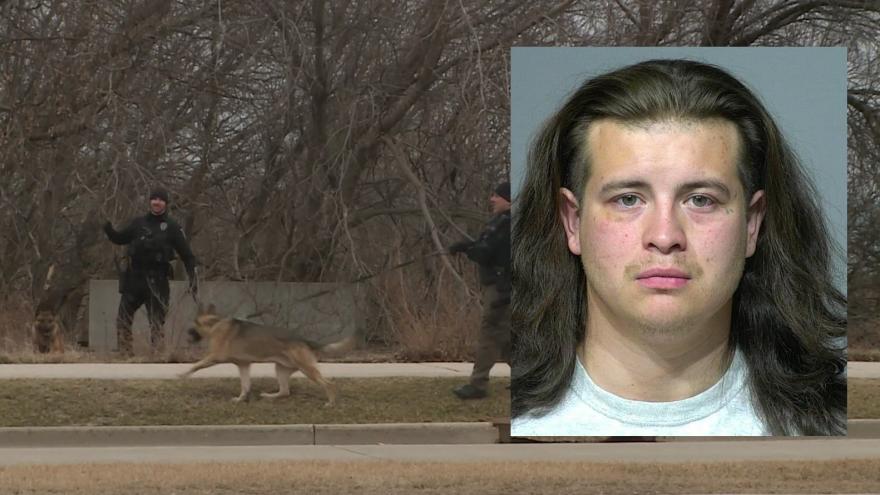 CUDAHY, Wis. (CBS 58) -- A 26-year-old Green Bay man has been criminally charged in connection to a pursuit and shooting that happened in Cudahy.

According to a criminal complaint, on March 21, Milwaukee police were called to the Econo Lodge Hotel located near 13th and College and spoke with a 36-year-old woman who stated she heard an argument coming from room 140, so she went to the room to calm things down.

While there, the 36-year-old woman told officials she observed another woman, later identified as a 46-year-old, arguing with a man named Iroquois Regazzi. She stated the arguing continued and Regazzi started yelling at everyone to get out of the room and was then seen waiving a handgun. At one point, Regazzi allegedly said he was, "gonna pop a round off!"

According to the complaint, the 36-year-old woman's 15-year-old daughter came to the room and Regazzi "charged at her." The woman told investigators Regazzi began to swing his arms around and fired a shot from the handgun. The bullet struck a door that was next to her. Regazzi then allegedly struck the 15-year-old in the forehead with his empty hand.

Officials say the 36-year-old woman asked someone to call police and Regazzi fled the scene.

The complaint says an officer interviewed the 46-year-old woman who was arguing with Regazzi. She allegedly stated Regazzi had possession of her gun that was under the seat of her vehicle. She did not give permission for Regazzi to take her firearm. The woman told investigators Regazzi and two other individuals climbed out of the hotel room window and fled the scene -- taking the gun with him.

On March 22, Cudahy police observed a vehicle speeding in a 25 mph zone near Packard and Grange Avenues. The officer followed the vehicle, turned on his emergency lights and siren to stop them. The failed to stop and fled.

Officials say at one point, the officer observed the front seat passenger -- later identified as Regazzi -- reach out the window, point a firearm in the officer's direction and fire twice.

The vehicle continued to flee, reaching speeds of 78 mph, the complaint says.

When the vehicle approached the intersection of South Packard and Lake Drive, it jumped the curb, struck a tree and came to a stop. Officials say Regazzi exited the front passenger door and ran from the scene.

Recovered from the vehicle was a shotgun and ammunition.

Cudahy police searched the area, along with the FBI. Officials were able to find Regazzi with help from property surveillance and he was taken into custody.

The driver of the fleeing vehicle was interviewed after being read his Miranda rights. He stated, in part, there were shots fired at the Econo Lodge and after he heard the shots, he went to his vehicle to leave. The driver told officials Regazzi entered the vehicle with a firearm and told him to drive.

According to the complaint, the driver and Regazzi returned to the hotel where Regazzi retrieved a shotgun from the 46-year-old woman's vehicle and brought it back in the car. While driving the next day, a squad car pulled behind them and Regazzi allegedly pointed a firearm at the driver and stated, "go, go, go!"

The driver that fled police identified Regazzi in a photo lineup.

Iroquois Regazzi was charged with the following: