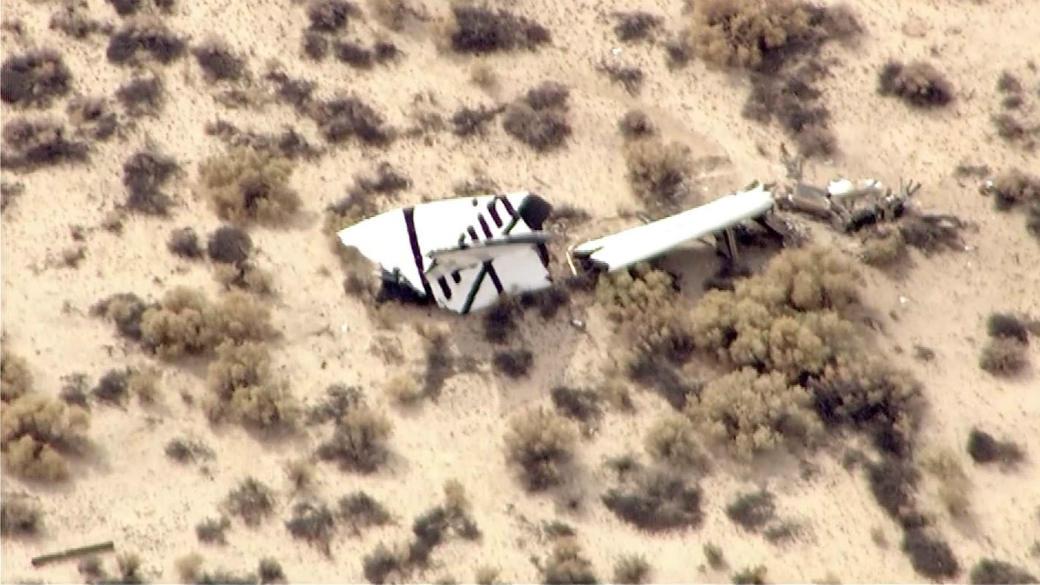 The first sign there was a problem Friday with Virgin Galactic's SpaceShipTwo came at about 45,000 feet, just two minutes after the spaceplane separated from the jet-powered aircraft that carried it aloft, officials said.

It wasn't something overt with SpaceShipTwo, said Stuart Witt, the chief executive of Mojave Air & Space Port, where SpaceShipTwo was launched and monitored.

It was what didn't happen next during the test flight, he said. Witt did not offer details, but appeared to indicate the spaceplane did not follow its previous test-flight patterns.

Nothing seemed abnormal during the takeoff or flight prior to the spaceplane's failure, he told reporters during a news conference.

This much is known, according to Witt and others: One pilot is dead and another has been hospitalized with serious injuries.

There have been reports that the pilots managed to bail out, using parachutes. But neither Virgin Galactic nor its partner conducting the test flight, Scaled Composites, have confirmed the accounts.

The two pilots worked for Scaled Composites, according to that company's president, Kevin Mickey. He declined to publicly identify the pilots or detail their experience.

\"Space is hard, and today was a tough day. We are going to be supporting the investigation as we figure out what happened today, and we are going to get through it,\" Virgin Galactic CEO George Whitesides said.

\"The future rests in many ways on hard, hard days like this.\"

Virgin Galactic has planned for years to sell trips in which SpaceShipTwo transports passengers about 62 miles above Earth -- the beginning of outer space -- and lets them experience a few minutes of weightlessness before returning to ground.

The incident occurred over the Mojave Desert shortly after SpaceShipTwo separated from WhiteKnightTwo, the vehicle designed to carry it aloft, the Federal Aviation Administration said in a statement. The jet-powered WhiteKnightTwo returned safely to the Mojave Air & Space Port, Witt said.

Questions are being raised about a new fuel mixture used after Mickey said it had been ground-tested a number of times but Friday's flight was the first time it was used in a test flight.

The National Transportation Safety Board is sending a \"go team\" to investigate the test flight failure, the agency said.

The NTSB is leading the investigation with FAA support, under a voluntary cooperative agreement between the agencies, the FAA said.

The FAA regulates the U.S. commercial space transportation industry, and the agency's Office of Commercial Space Transportation provides compliance monitoring and safety inspectors for each FAA-authorized launch, the agency said. \"Regulations require that crew members are aware of the inherent risks involved in the operation and acknowledge them,\" the FAA said.

Virgin's chief, Richard Branson, confirmed the loss on Twitter: \"Thoughts with all @virgingalactic & Scaled, thanks for all your messages of support. I'm flying to Mojave immediately to be with the team.\"

In a written statement, NASA Administrator Charles Bolden offered his condolences to the family of the pilot killed in the test flight failure.

\"While not a NASA mission, the pain of this tragedy will be felt by all the men and women who have devoted their lives to exploration,\" Bolden said. \"Space flight is incredibly difficult, and we commend the passion of all in the space community who take on risk to push the boundaries of human achievement.\"

It's unclear what the failure of the spaceplane will mean for the program. Virgin Galactic planned to send paying customers on SpaceShipTwo as early as 2015.

With composite lightweight materials, \"feathered\" rudders capable of turning 90 degrees and a hybrid rocket engine, SpaceShipTwo is as safe as modern technology can make it. As designer and aviator Burt Rutan put it in 2008, \"This vehicle is designed to go into the atmosphere in the worst case straight in or upside down and it'll correct.\"

Details of Friday's test flight plan were not immediately known. But in previous test flights, SpaceShipTwo has been loaded on the jet-powered WhiteKnightTwo, which can take the spaceplane to about 50,000 feet before the spaceplane is released to fly free.

At that altitude, SpaceShipTwo would then fire its RocketMotorTwo -- a hybrid rocket engine powered by both solid and liquid fuel.

SpaceShipTwo would reach supersonic speeds on its way to its intended altitude of about 62 miles above the Earth. At that point, people onboard would get about five minutes of weightlessness before the bonds of earth retract with 6 G's of force.

The spaceplane would then glide back through the atmosphere to landing.

Friday's is the second incident in a week involving the commercial space industry.

On Tuesday, an unmanned Antares rocket exploded just after takeoff off the coast of Virginia. Controllers deliberately destroyed the craft after it became apparent there was a problem, a spokesman for Orbital Sciences Corporation said Thursday.