Officers honored for helping save a woman's life 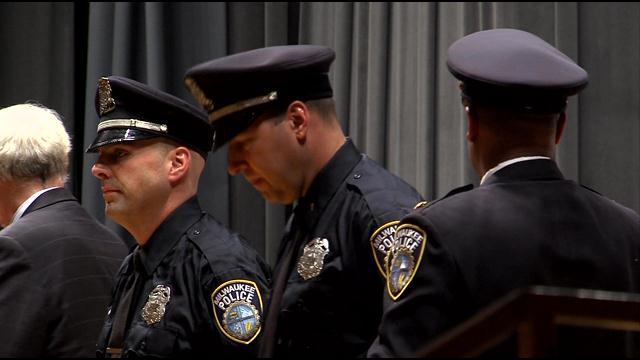 Dozens of officers and civilians were honored Wednesday evening for their heroism at the Milwaukee Police Department Fall Merit Awards ceremony-- including an officer who helped saved a woman's life after she fell into the Milwaukee River.

Officer Rick Bungert was one of three district one officers who received the Lifesaving Award at the Milwaukee Police Department..

\"We all searched together,\" recalled Bungert, \"we were all looking for the person, we originally thought it was a child.\"

The victim was a 62-year old woman who fell into the river at Pere Marquette Park in July.

\"Officer Todd Bohlen happened to look through the planks and saw with his flashlight, the body, and he was unable to get to the body,\" said Bungert.

But Bungert found a way to get the woman out.

\"I just kind finagled my body around and got the back of her shirt and pulled her out,\" said Bungert.

The woman was unconscious, and that's when he turned to Bungert of his partners,  for back-up.

\"I said just give her compressions, so he started with the compressions, and I was going to do mouth to mouth,\" explained Bungert.

The woman was eventually revived in the ambulance truck.  Five months later, Bungert and his two partners were honored for their work in saving her life.

Bungert says at the end of the day-- he's just doing his job.

\"Everyday officers do this,\" said Bungert, \"and it's just nice to be recognized once in a while.\"

Bungert says this is his first time receiving this award with MPD.  He's spent the past 18-years in law enforcement.