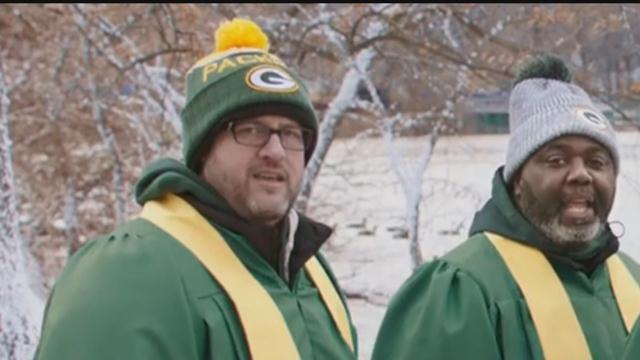 Have you seen this?

Just one of the many commercials you'll see in this year's Super Bowl it features people that were born roughly nine months after their parents' favorite team won it all.

You can figure it out yourself.

The Packers fan on the left with the glasses in the NFL commercial, that's Todd Mathias from Oconomowoc.

He was one of six packers fans picked out of hundreds to appear in the commercial and got a free trip to New York!

The "Super Bowl Babies Choir" is a 60-second spot set to air during Super Bowl 50between the Denver Broncos and Carolina Panthers. The choir includes 49-year-old Green Bay Packers babies all the way to 1-year-old Seattle Seahawks infants.

"For 49 years, our fans have rallied around their favorite teams on Super Bowl Sunday and passed their pride and passion down to the next generation," said NFL Chief Marketing Officer Dawn Hudson. "We are excited to celebrate our football families by shining the spotlight on 'Super Bowl Babies,' those fans born into a lifelong love of their team and the game."

"An event like this brings so many people together, and to have a song I wrote 25 years ago still be so loved is very special for me," Seal said in a statement. "I can't wait to be at Super Bowl and be a part of Super Bowl 50 with the NFL."

The NFL worked with the Super Bowl winning teams to find these babies. They sent out emails to season ticket holders and then held auditions. Ella McHugh and Maddox Butler are two of the kids chosen to represent the Indianapolis Colts in the ad.