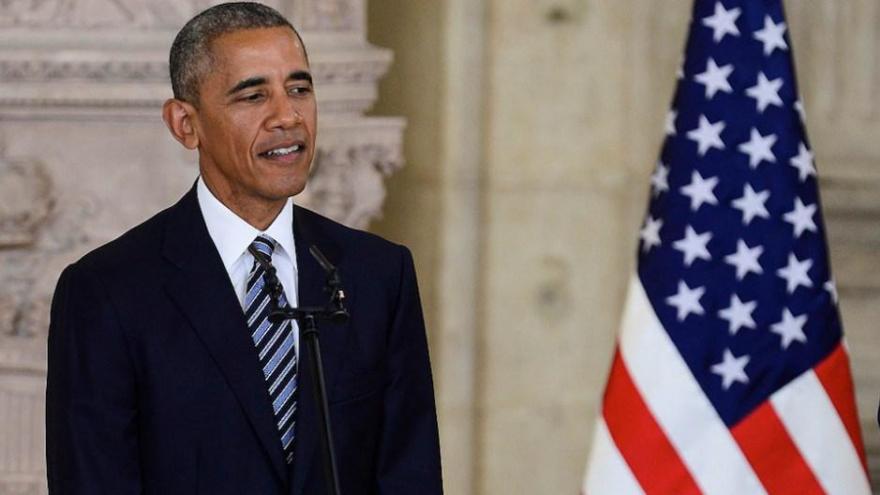 African-Americans traditionally vote Democrat, so low black voter turnout in Milwaukee in 2016 proved costly for Hillary Clinton. She narrowly lost Wisconsin, which was among a handful of states that helped determine the presidency.

When Obama won Wisconsin in 2012, black voter turnout was at 74 percent, but that number plummeted to 55 percent in 2016, according to the liberal Center for American Progress. The group's analysis concluded that Clinton would have narrowly won Wisconsin if black turnout had remained at 2012 levels.

"We're excited to have him here to energize that base and to really amplify the candidates that we're trying to elect in two weeks," said Angela Lang, the executive director of Black Leaders Organizing for Communities. The group formed after the 2016 election with the goal of engaging and building trust with black voters in Wisconsin.

The overall number of people who voted in Milwaukee declined by 41,000 votes in 2016 compared to 2012 — a drop the city's election chief said was likely caused by tighter voter ID restrictions in Wisconsin.

Democrats saw black voter turnout fall elsewhere in 2016. In Detroit — a majority-black Democratic stronghold — turnout also dropped by 41,000 votes, or 14 percent, from Obama's 2012 re-election. That was also a factor in Clinton's narrow loss to President Donald Trump in Michigan.

African-Americans make up 6.7 percent of Wisconsin's 5.8 million residents. But in Milwaukee, a city of nearly 600,000, blacks comprise 40 percent of the population. The vast majority live north of downtown in neighborhoods hardest hit by poverty and crime.

The setting for Obama's rally is a high school in a ZIP code where nearly half the residents live below the poverty level, 21.6 percent are unemployed, and a quarter of the housing units are vacant, according to 2016 census estimates .

"What we are talking about is a plan to actually improve the lives of people across the state — whether it's better-paying jobs, access to affordable health care, criminal justice reform, investments in schools. Those are motivating factors to get people to vote," said Mandela Barnes, who is trying to become the state's first African-American lieutenant governor and only the second black person in Wisconsin's 170-year history to hold statewide office.

"We got Barack Obama and people felt like, 'Oh, we've got black voters, younger voters locked down forever,'" Barnes said. "That's just not the case. We learned a hard lesson."

Obama will also be stumping for Democratic U.S. Sen. Tammy Baldwin and congressional candidates Randy Bryce and Dan Kohl. He didn't campaign for Clinton in Milwaukee and the last time he visited the city for a political event was to celebrate Affordable Care Act enrollments in March 2016.

BLOC staffers have been visiting black neighborhoods on Milwaukee's west side, to encourage people to take part in the Nov. 6 midterms.

"If we don't vote, we're only hurting ourselves and our community," BLOC staffer Tony Horton said during one such visit.

One retiree, 67-year-old Charles King, told Horton that he felt Obama was stifled in Congress and that fewer African-Americans voted in 2016 "because they lost hope."

King said he's confident he will benefit from Social Security and Medicare, but that he worries about the next generation. Democrats have been warning voters that Republicans will gut entitlement programs to pay for the new GOP tax law. Senate Majority Leader Mitch McConnell said last week that entitlement spending is contributing to the rising federal deficit.

King said the reason African-Americans in Milwaukee should vote is simple: "They don't get their ass now, I pity their future."