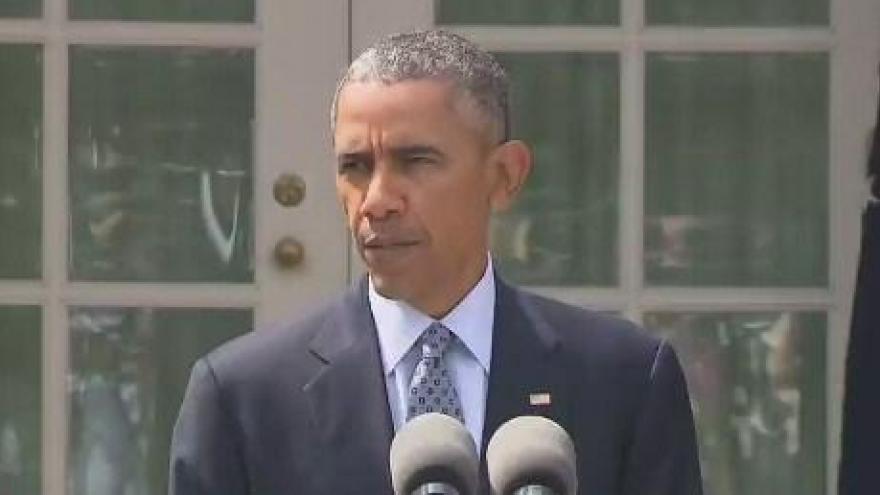 (CNN) President Barack Obama issued a blistering rebuttal to opponents of the Iran nuclear deal as he sought to bolster congressional support for the agreement with a major speech on Wednesday.

He declared that lawmakers risk damaging American credibility if they vote to scuttle the deal and equated them with those who pushed for war with Iraq -- and with the mullahs in Iran.

"It's those hardliners chanting 'death to America' who have been most opposed to the deal. They're making common cause with the Republican caucus," Obama said.

Using two points in history to underscore his argument -- John F. Kennedy's push for diplomacy with the Soviet Union and the vote to invade Iraq in 2002 -- Obama warned that U.S. global standing was at stake.

The decision facing lawmakers next month is the most significant since Congress voted to invade Iraq more than a decade ago, Obama said, insisting later that "some form of war" was assured if the Iran deal falls through.

The 2002 Iraq vote, which spawned foreign policy headaches for the past two administrations, was driven by war-hungry politicians, Obama claimed. He said Wednesday that opponents of his agreement with Iran were deploying similar arguments ahead of the September vote in Congress.

"None of these arguments hold up. They didn't back in 2002 and 2003 and they shouldn't now," Obama said. "The same mind-set, in many cases offered by the same people who seem to have no compunction with being repeatedly wrong, led to a war that did more to strengthen Iran, more to isolate the United States, than anything we have done in the decades before or since."

Obama was not a member of the U.S. Senate in 2002, but he has repeatedly argued that it was a mistake to vote for war in Iraq and made that sentiment a cornerstone of his 2008 presidential campaign. Yet former senators who have served in his administration -- including Vice President Joe Biden and his former and current secretaries of State, Hillary Clinton and John Kerry -- all voted for the resolution.

Republicans were quick to push back on the President's remarks after the speech, with Senate Foreign Relations Committee Chairman Bob Corker, a Tennessee Republican, saying that he was "disappointed" by Obama's remarks and his attempt to turn the Iran deal into a partisan issue when there's concern in both parties.

He particularly objected to Obama's framing the debate as equating an objection to the deal with "this straw man that says it's about war."

He said that military officials have offered a different assessment of what the deal being voted down by Congress would mean.

"In testimony, the officials that have sat at the table with the President, have never ever ... said that if this deal doesn't work out, would there be military action," Corker said. Instead, he continued, they've said that "it's likely that all our European partners would stay with us because they value our relationship more."

And in a direct jab at Obama, he added, "I think everyone in the U.S. knows that this President is not going to carry out military action against Iran. Iran knows that."

With a little more than a month before the congressional review period expires, Obama's administration has launched an aggressive lobbying effort to convince Democrats of the deal's merits. They've largely written off trying to convince Republicans, many of whom denounced the negotiations that led to the accord.

Opponents of the plan argue it doesn't have enough teeth in its inspection provisions and worry it allows too much of the country's nuclear infrastructure to remain in place.

Part of the administration's challenge is countering an onslaught of advertising and lobbying coming from opponents of the deal, led by the American Israel Public Affairs Committee. AIPAC has committed to spending upwards of $20 million in a bid to stymie the plan.

Netanyahu repeated his dire warnings that the deal would imperil Israel and the wider Middle East.

"The nuclear deal with Iran doesn't block Iran's path to the bomb, it actually paves Iran's path to the bomb," Netanyahu said in his presentation, which was sponsored by the Jewish Federations of North America and the Conference of Presidents of Major American Jewish Organizations and broadcast to synagogues and community centers around the country.

"It would be an abrogation of my constitutional duty to act against my best judgment simply because it causes temporary friction with a dear friend and ally," he said.

Obama and top administration officials have spent the month since the deal was signed personally meeting with lawmakers to explain the technicalities of the plan.

On Capitol Hill Wednesday, lawmakers pressed administration officials to explain the existence of a so-called "side deal" between Tehran and the International Atomic Energy Agency, the United Nations nuclear watchdog.

Wendy Sherman, the U.S. undersecretary of state for political affairs, said she had read a provisional version of the deal between Iran and the IAEA but not the final document. She said it's typical for agreements between the nuclear agency and countries to remain confidential.

Yukiya Amano, the IAEA director general, was briefing lawmakers behind closed doors Wednesday and made brief comments praising the deal ahead of a meeting with Senate Foreign Relations Committee. "In terms of verification, this is a clear net gain," he said.

As both the president and Congress head to summer vacations, the White House has pledged to maintain lines of communication between Martha's Vineyard, where Obama will spend the next two weeks, and lawmakers in their home districts.

Many of those members of Congress have planned town hall-style events to weigh constituent's opinions of the deal -- the same format that harnessed and increased anger over Obama's health care law five years ago.