Obama arrives in Cuba; hopes visit will usher in change 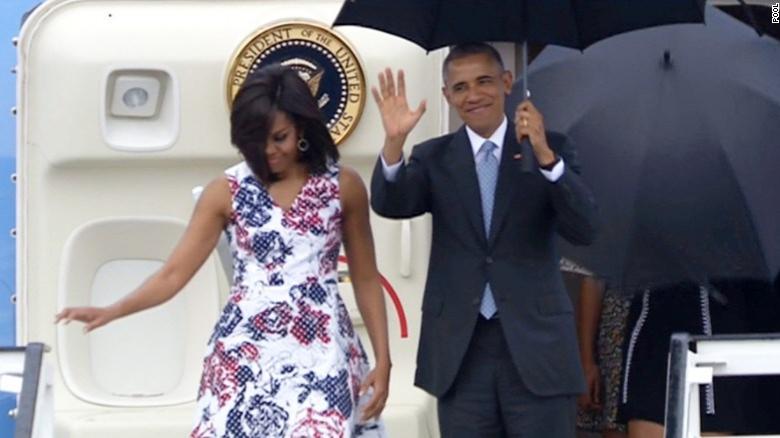 (CNN) President Barack Obama touched down in Cuba on Sunday, definitively ending a half-century of estrangement in a dramatic personal demonstration of his core foreign policy principle of engaging America's enemies.

It's a shift that the change-minded president hopes will nudge the Communist government here to grant more freedoms to its people and open new economic channels for American businesses. The President and his allies also hope a successful détente will offer something bigger: a lasting example of diplomacy's power in dealing with longtime foes.

The final verdict on Obama's Cuba policy has yet to be rendered. The regime in Havana has shown little movement toward improving human rights or opening its state-run economy, and Obama admitted this week that Congress isn't likely to lift a longstanding trade embargo before he leaves office in January 2017.

But the sight of Air Force One landing at Havana's Jose Marti Airport in the early evening on Sunday nonetheless represents a diplomatic metamorphosis that few could have imagined even five years ago.

"My view is that this is the beginning, not the end, of what is going to be a journey that takes some time," Obama told CNN in an interview ahead of the trip.

The presidential trip to Havana is the culmination of a three-year effort to restore ties to the island, which sits 90 miles from Key West, Florida, but has long been off-limits for most American visitors. For decades, the island was regarded as a Cold War adversary, a forbidden place run by bearded strongmen that residents fled on makeshift rafts.

Following in the path of the Obamas
With his family in tow, Obama hopes to change that perception, highlighting the country's emerging private economy and meeting with outspoken opponents of the Castro regime. Before he departed, Obama met with Cuban-Americans in a bid to garner support for his diplomatic thaw, which is still met with skepticism among many in the large Cuban diaspora in South Florida and elsewhere. Several of the participants in the meeting will join Obama on his trip.

With relaxed restrictions on who can travel to Cuba, many more Americans will now able to follow the Obamas' lead. And administration officials hope improved economic ties can foster a new dynamic between individual Cubans and Americans.

U.S. airlines sign up for commercial flights to Cuba

But critics of Obama's policy, including outspoken Cuban-American members of Congress such as Republican Sens. Marco Rubio and Ted Cruz and Democrat Robert Menendez, argue the opening only rewards an authoritarian regime -- one that has yet to show much sign of reform.

Obama will tend to the Cuban government while here, sitting for his third bilateral meeting with leader Raul Castro since taking office and participate in the usual trappings of an official presidential visit, including a formal welcoming ceremony and a state dinner at the Revolutionary Palace.

But he'll also peel away for less formal encounters, allowing the presidential spotlight to also shine on ordinary Cubans living in a new era.

He'll address the Cuban people during a speech broadcast on state television and meet with anti-Castro dissidents. He's expected to take in the faded colonial beauty of Old Havana alongside his wife, daughters and mother-in-law.

And before he departs Tuesday, Obama will watch the Cuban national baseball team play the Tampa Bay Rays, in town for an exhibition game as U.S. Major League Baseball works to update immigration rules for Cuban players.

The sight of a sitting American president setting foot on the island will be a novelty for most Cubans. The last U.S. leader to visit was Calvin Coolidge, who voyaged into Havana Harbor on a battleship in 1928. This time, Obama's aides want to project a far different image.

"There's great anticipation here for the visit," said Jeffrey DeLaurentis, the top American diplomat in the recently reopened U.S. Embassy in Havana. "We want to broaden the engagement underway."

That engagement began in December 2014, when Obama announced he was working to reopen long-frozen diplomatic ties to the island. The declaration was punctuated by the release of Alan Gross, an American prisoner in Cuba, in exchange for Cubans held in American jails.

Since then, the U.S. government has steadily removed restrictions on travel and commerce between the neighboring countries. Last week, officials announced some of the biggest changes, including allowing Cubans to open U.S. bank accounts and permitting Americans to travel here individually, rather than as a group, for educational or cultural reasons.

You've got mail
The first mail flight between the two countries since 1968 arrived in Havana from Miami on Wednesday, carrying on it a letter from Obama to a Havana coffee shop owner, a response to a series of missives he'd received ahead of his trip.

It's still difficult to get here as an American; charter flights remain the only option until U.S. carriers resume regular flights later this year.

But once those flights are underway, U.S. officials expect a steady flow of American visitors that will outlast Obama's presidency.

"We very much want to make the process of normalization irreversible," said Ben Rhodes, Obama's deputy national security adviser and a chief draftsman of the Cuba policy.

What you need to know before traveling to Cuba

Rhodes and Obama have cited Cuba -- along with a brokered deal with Iran to end its nuclear program -- as successful evidence of the President's 2009 inaugural vow to "extend a hand" to traditional U.S. foes.

But without congressional action to lift a longstanding trade embargo, there's little Obama can do to fully restore economic ties to Cuba. He told CNN he didn't expect lawmakers to take action while he's in office.

"My strong prediction is that sometime in the next president's administration, whether they are a Democrat or a Republican, that the embargo in fact will be removed," he said.

The current Congress has shown little appetite for such a move.

"There has not been a single democratic opening; not a single change on the island in human rights," Rubio, at the time a GOP presidential candidate, said during a CNN debate last week. "In fact, things are worse than they were before this opening."

He continued, "The only thing that's changed as a result of this opening is that now the Cuban government has more sources of money from which to build out their repressive apparatus and maintain themselves there permanently."

While most Republicans in Congress have expressed little interest in lifting the blanket restrictions, Obama has found some bipartisan support.

"If there's one policy that has aided the Castros, that's kept them in power, it's the travel ban and the embargo," Sen. Jeff Flake, an Arizona Republican who will travel with Obama to Cuba, told CNN in an interview. "It's given them a convenient excuse for the failure of socialism. So we ought to remove that crutch. We're doing so. And I think we'll move ahead more quickly now."