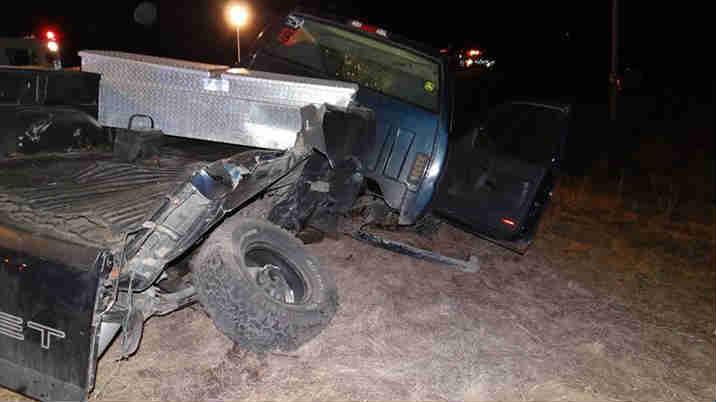 \"There's so many accidents it seems here,\" Gerald Rosenthal said Thursday morning from his usual table at the nearby Hillcrest Inn.

The dangerous junction produced another crash Wednesday night. Just after 8:30, two men in a pickup truck headed south on Hwy P initially stopped at the sign, then started to go through as a semi with the right of way approached on Highway 33. The semi, which was carrying 40,000 pounds of cheese, smashed into the pickup and flipped on its side ending up in a nearby pond.

Flight for life took a 67-year-old passenger, David Strobel, to Froedtert while crews sent both drivers to local hospitals.  Sheriff's officers worked overnight clearing the cheese from the truck by hand.  Highway 33 remained at least partially closed until about 10 a.m. Thursday.

\"A collision like that could very easily be a fatality,\" Dodge County Sheriff's Captain Trace Frost said.

Frost says there have been a handful of deadly crashes at the intersection in the past, but the sheriff's office has worked with the county and state to make the intersection safer. The DOT added more signs and flashing lights along Highway P in June and July of 2014.  Workers also reground the rumble strips and raised the stop signs in 2013.

\"It's hard to say if it did help,\" Frost said. \"If it prevented one crash, it helped. But the crashes that don't happen we don't know about.\"

\"It shouldn't be that dangerous, but it seems to be for some reason,\" Rosenthal said. \"I don't know why, I think you can see both ways pretty well.\"

\"Can't they do something a little different or put like a four-way stop or something,\" Carey asked. \"I mean, the traffic there is crazy.\"

More safety changes could come, but until then officers hope drivers follow the rules.

\"It comes down to awareness, driving defensively and just obeying all traffic laws,\" Captain Frost said.

A DOT spokesman tells CBS-58 news the state is monitoring the intersection, but it's too early to judge if the additional signs and lights have made a difference. The sheriff's office says a roundabout could be another option.

The sheriff's office had no update on Strobel's condition Thursday night.