Notice the family of geese on Wells Street? Locals draw parallels to Gertie the Duck

NOW: Notice the family of geese on Wells Street? Locals draw parallels to Gertie the Duck

MILWAUKEE (CBS 58) -- During difficult times, Milwaukee has historically looked to birds as symbols of strength and hope.

An adorable set of goslings is capturing the hearts and attention of people in downtown Milwaukee as the pandemic gives them more time to walk, run and explore the city.

After walking on the Wells Street bridge several times a week, Andrew Harrington’s curiosity was captured by the gaggle of geese. The feisty parents started making their nest in a planter on the bridge about a month ago.

"I actually walked by when one of the parents was standing up over the eggs, so I could like really tell there was a nest going on," Harrington said. 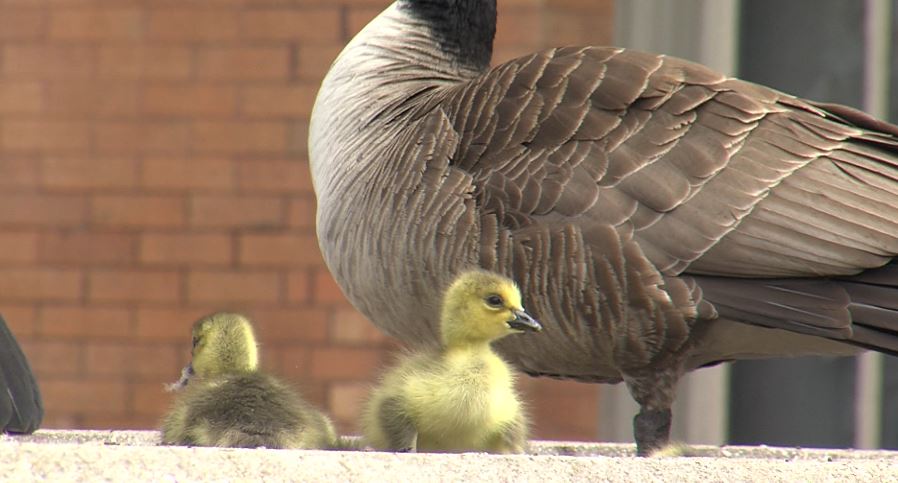 The four goslings hatched this week and jumped into the water on Friday afternoon. The little ones have no idea that long before they were born, people around the city were rooting for them during a time when we all need something to root for.

"I was like, 'Oh it'll be fun to kind of watch this family be born eventually hopefully,'" Harrington said. "I saw on Reddit that a bunch of other people were following it, too, which was awesome. It was cool to connect with different people over this family that we're all watching."

And it’s not lost on some locals the similarity to one Milwaukee legend, Gertie the Duck.

Statues of Gertie and her six ducklings are just one street away from the family of geese.

Gertie's story dates back to 1945, the end of World War II, when more than 2 million visitors came to Milwaukee to see a duck’s nest. A newspaper reporter kept tabs on her progress and safety, drawing an interest across the country.

"It was neat that Milwaukee gave hope to the whole country at one time... and now we have that sculpture so we remember Gertie and her hope that she gave us," said Milwaukee resident Tracey Sperko.

Now, Sperko said it's nice to have a reason to smile as our lives are turned upside down yet again.

"We're home. We can't do all of the busy things we normally would do, so (it's) this idea of this family and watching it where normally you didn't have time because you were hurrying to work and you had other things to worry about," said Milwaukee resident Tracey Sperko.

If you're wondering whether Mama Goose has a name, Reddit users named her "Bridget."