Not Even Tornado Sirens Stop Mich. Couple from Saying “I do” 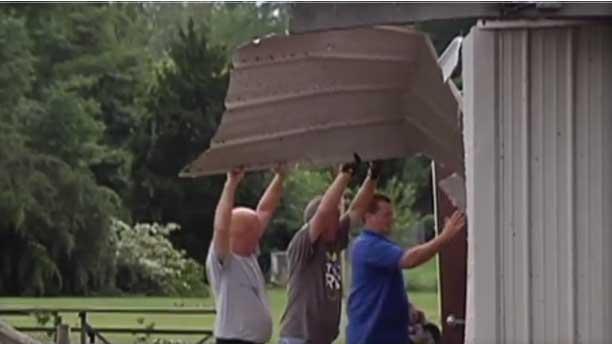 GRAND RAPIDS, Mich. (CBS NEWS)-- Not even tornado sirens could stop a Michigan couple from saying “I do.”

As the sirens blared across Grand Rapids, Brandon Warner married Breane Proctor in front of family members and guests at a church.

Despite the storm threat, Warner decided to proceed with Saturday’s ceremony.

“Bree is ready and we’re all here. Let’s go through with this,” he told The Grand Rapids Press for a story Monday. “Let’s make it happen. I figured if we were going to get hit, maybe it was meant to be.”

“We just kind of shrugged our shoulders and went down the aisle,” said Proctor.

After exchanging vows, storm sirens sounded again and everyone stood beneath the church’s balconies, away from its stained-glass windows. A little less than an hour after they said “I do,” a tornado reportedly touched down less than three miles away, according to the paper.

“The church seemed so big and massive and sturdy,” Brandon said. “I truly did not know how bad it was until everyone got on their cellphones and looked at the maps.”

After the storm passed, the wedding party rode around to look at some of the storm damage.

Some trees were knocked over and power lines were downed across some parts of southwestern and western Michigan. No injuries were reported.