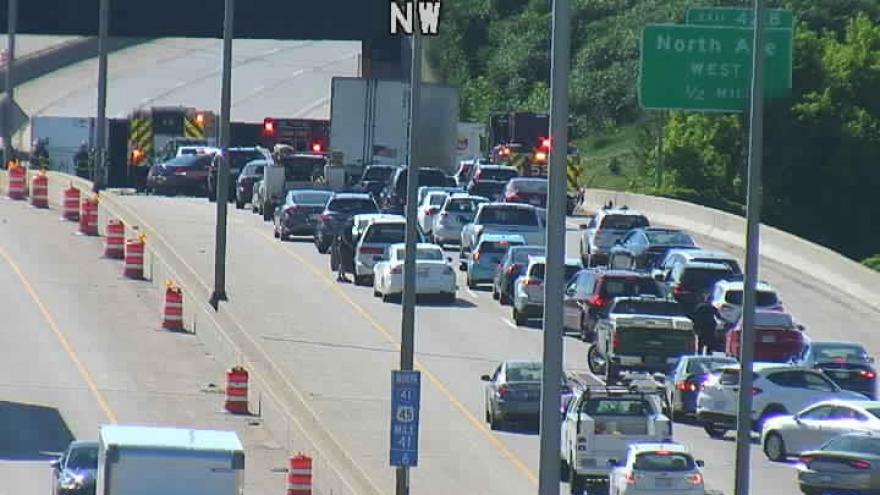 The incident was reported around 4:20 p.m. when the semi rolled on I-41/US 45 north just south of North Avenue.

The semi used compressed natural gas as fuel which was leaking and caused the closure of all nearby ramps and southbound lanes.

During an investigation, deputies determined that when traffic slowed in front of the truck, the driver was unable to slow and hot the car in front of it causing a chain reaction. The semi veered to the left during the crash and hit the median wall crossing all lanes of traffic and flipping on its side.

The semi driver from Waukesha was ticketed for unreasonable speed truck following too closely.

There is also a full closure of I-41/US 45 Southbound. Traffic is being directed off at Burleigh.

The closure is expected to last 3 hours.

WAUWATOSA, Wis. (CBS 58) -- The northbound lanes of I-41/US 45 are blocked north of Mayfair Road due to a semi rollover.

The Milwaukee County Sheriff's Office is currently on scene. They say the closure will be effective for approximately three hours.

There is currently no word on any injuries.

The rollover happened around 4:20 p.m. on Monday.

The Milwaukee County Sheriff's Office is asking that citizens avoid going northbound from the Zoo Interchange onto I-41/US 45 NB.