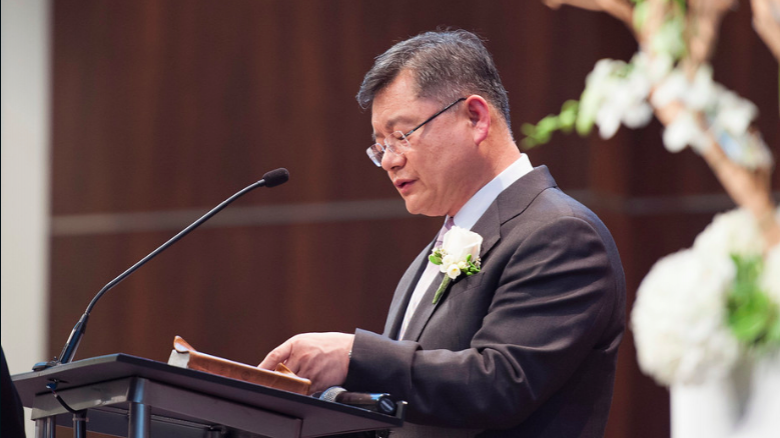 (CNN)A Canadian pastor, detained in North Korea for 10 months, has now been sentenced to life in prison there "for subversion."

His punishment: A lifetime of labor, the agency said.

Lim, 60, ministers the 3,000-member Light Korean Presbyterian Church in Toronto. He is a Canadian citizen who emigrated from South Korea in 1986.

He traveled to North Korea from China on January 30 on a routine humanitarian trip, a spokeswoman for his family said. He was detained in February.

Lim had visited the country over 100 times, his family said.

On this trip, he planned to tend to aid projects established by his church in the northeastern city of Rajin, including an orphanage, a nursery and a nursing home.

"It is this tremendous love for the people of the DPRK that motivated Mr. Lim to travel to the nation over 100 times," said family spokeswoman Lisa Pak.But North Korea painted a different picture of his motivation.

In July, Lim was brought out a news conference where he read from a statement, confessing to activities aimed at toppling the North Korean government, according to the country's state-run news agency KCNA.

"The purpose that I traveled about several parts of the country on the pretext of 'aid' was to build a base to overthrow the system of the country and create a religious state, taking advantage of the policies of the U.S. and South Korean authorities," Lim said, according to the The Associated Press, which was present for the news conference. AP reported it was delivered in front of a packed room of Pyongyang-based journalists.

Westerners held previously in North Korea have said that their confessions were given under pressure from the state.

In April, U.S. citizen Sandra Suh was released from detention in the country and deported to the United States after admitting to "plot-breeding and propaganda against the DPRK," according to KCNA.In August, North Korea released footage of Lim confessing again -- this time at a Pyongyang church.

"My biggest crime is my act of blindness in severely insulting the highest dignity and system, the DPRK," Lim is shown saying to a church congregation while dressed in a dark suit and tie. The video was posted on Uriminzokkiri, a state-run propaganda website.

The church service took place on August 2nd at Pyongyang's Bongsu Church. There are several places of worship in the North Korean capital, including the Protestant church where Lim appeared. It is known to be used for propaganda purposes but run by state-monitored religious associations.Canada has limited diplomatic relations with the reclusive country.

But behind the scenes, the Canadian government waged an aggressive campaign to win Lim's freedom, according to a source with knowledge of the proceedings.

Two delegations from the Canadian Embassy in Seoul held backchannel meetings with North Korean officials in Pyongyang, most recently after Canadian Thanksgiving in October.

And Canadian consular officials spoke informally with North Korean delegates on the sidelines of United Nations meetings, the source said.

In November, a new set of state officials in Canada, loaded into power after the victory of Justin Trudeau and his Liberal Party in a general election last month, were charged with bringing Lim home.