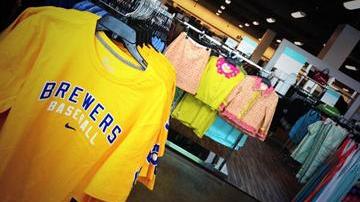 WAUWATOSA-- What appears to be a brand new building, was once an old warehouse.

\"It's exciting because it's an adaptive reuse of something, we didn't just tear everything down and start from scratch,\" said Mayor Kathy Ehley, of Wauwatosa.

The Mayfair Collection in Wauwatosa is home to the only Nordstrom Rack in Wisconsin.  Before expanding in Wisconsin, shoppers had to drive out of state.

\"We know they've been driving to the Chicago Area to shop with us and we appreciate that,\" said Naomi Tobis, a Nordstrom Spokesperson, \"but we're excited to make it more convenient for them and bring them a store closer to home.\"

Team members spent the day stocking shelves with accessories, clothes, and shoes for Thursday's grand opening, and there's a reason why they chose the location near Mayfair Mall.

\"This is a really great retail center,\" said Tobis, \"it has a great retail mix, so we really wanted to be part of a location where customers want to shop, and we really thought the Mayfair Collection was a great opportunity for us to serve more customers.\"

Customers won't raid the clearance racks until tomorrow morning, but the store and Mayfair Collection has already made an economic impact.  The mayor says this project create 500 jobs in retail and construction-- that's before sales tax.

This grand opening is part of the first phase of construction at Mayfair Collection-- and city officials hope it will encourage more wisconsinites to keep their business local.

\"I'm sure people will still go to Chicago because it's a great city,\" said Ehley, \"but they're going to have the convenience and ease of having that in their backyard as well.\"