NFL Player Walks Into Animal Shelter, Asks for Dog That’s “Been There a Long Time” 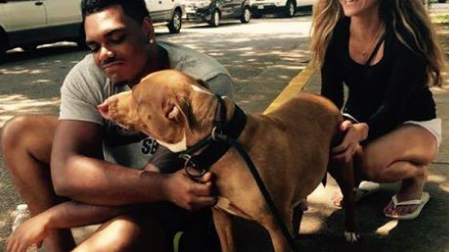 Over the weekend, Ronnie Stanley, his girlfriend, and his teammate Alexander Lewis visited BARCS, an animal shelter in Baltimore, in search of a new dog.

When he checked into the front desk he said, “We are looking for dog that’s been here a long time and maybe not-so-adoptable.” Not-so-adoptable means can mean either senior or physically imperfect pets.

BARCS says their matchmakers were delighted!

The staff showed Ronnie a few pets, and Winter was the lucky dog that caught his eye. Winter has been in the shelter for six years. She was found on a vacant property on a hot day with no electricity  or open windows.

Winter has a long hanging belly, most likely the result of overbreeding. “Well, that’s just what happens when you have babies,” Stanley said.

Stanley and his girlfriend signed Winter’s adoption papers, and they took her home the same day!