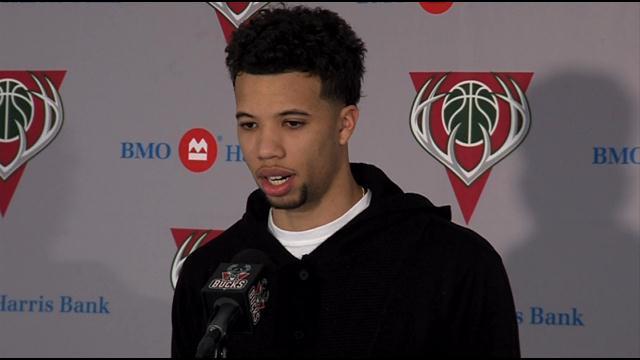 24 hours after the Milwaukee bucks traded Brandon Knight for 3 up and coming players, jerseys of Michael Carter-Williams are already for sale.

“Michael Carter-Williams is the future of this organization, so get fired up”, said a Bucks Fan.

The star guard isn't playing in Friday night's game due to injury, but he's being called the next Jason Kidd, putting up big numbers on the court.

\"I've always said to a lot of people, i try to emulate my game after his, and I'm really happy to be here”, said Michael Carter-Williams.

The Bucks traded away leading scorer Brandon Knight, but knowing Knight's contract would be up after this season, fans think it's a good move.

\"I think they had to do it if they weren't going to be able to sign guys for next year”, said Bucks fan David Connor. “I like it.\"

Bucks Center Miles Plumlee was born in Indiana, and so a move back to the Midwest is pretty sweet.

\"I have some family nearby”, said Miles Plumlee. “I'm sure they'll be taking me out and showing me around town. Family is from Neenah, so we came up here a lot growing up. I've always liked Wisconsin.\"

Going into the all-star break, the bucks had a great chemistry in position for a playoff run.

Tyler Ennis says it's important for the new trio to do their part.

\"Just come in and play my game”, said Tyler Ennis. “Don't try to do too much right away. But come out and be aggressive and look to fit in and build chemistry with these guys.\"

Bucks fan Matthew says he has high hopes for the future.