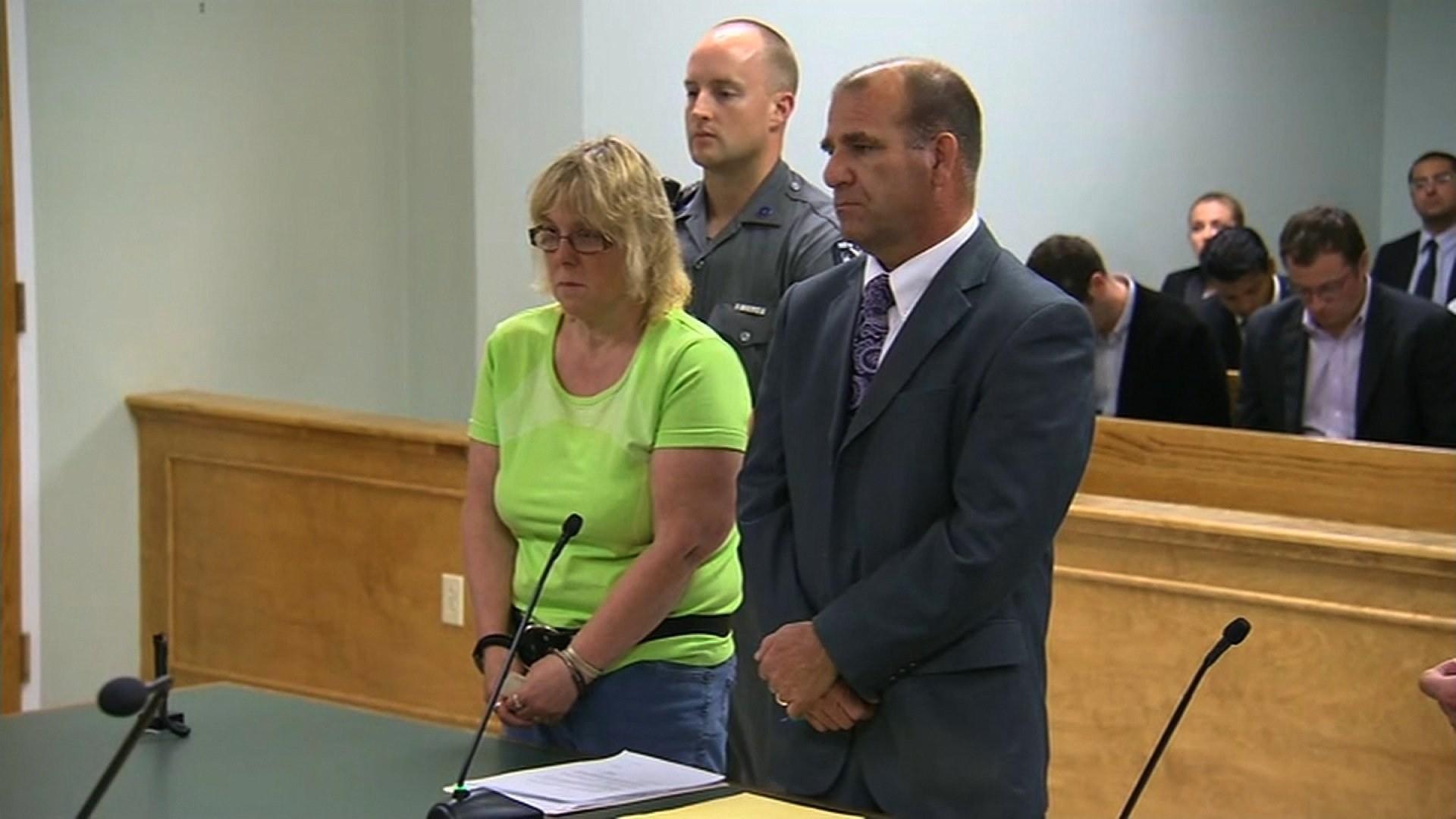 (CNN) -- A New York prison tailor who allegedly aided a pair of convicted murderers before their brazen escape was arraigned Friday on a felony charge of promoting prison contraband and a misdemeanor charge of criminal facilitation.

Joyce Mitchell, who authorities said has voluntarily provided useful information in the six-day manhunt, attended the arraignment hearing in handcuffs. She pleaded not guilty.

If convicted, she faces up to eight years in prison.

Mitchell has been suspended from her job without pay, the New York State Department of Corrections and Community Supervision said.

Since the breakout of felons Richard Matt and David Sweat was discovered Saturday, authorities have mentioned her as a possible getaway driver as well as a supplier of tools used in the escape. And her cell phone was used to make calls to people connected to Matt, according to a source.

Mitchell has told investigators that Matt made her feel \"special\" though she didn't say she was in love with him, a source familiar with the investigation said.

Her husband and prison co-worker, Lyle Mitchell, also is under investigation, authorities said.

Mitchell \"provided some form of equipment or tools\" to the inmates while her husband \"possibly could have been involved or at least had knowledge\" of the escape, Clinton County District Attorney Andrew Wylie told CNN. The information was developed through interviews.

Lyle Mitchell has not been arrested or charged. Joyce Mitchell's relatives have denied she did anything wrong.

Her husband worked in the maintenance department at the tailoring block where his spouse was employed, Wylie said. Lyle Mitchell has worked at the prison since 2005, most recently as an $57,697-a-year industrial training supervisor, the same title his wife held, according to state records.

The hacksaw blades and other items given to Matt were purchased over the past few months, according to law enforcement sources with knowledge of the investigation.

Matt and Sweat used power tools to cut through cell walls that included a steel plate and sever a 24-inch steam pipe -- once to get in and once more to get out -- and surfaced through a manhole. Despite all the time, effort and noise likely involved, authorities didn't learn anything was awry until a bed check at 5:30 a.m. Saturday.

Authorities strongly believe the fugitives are still together after deciding to continue their escape as a pair, two law enforcement sources briefed on the matter said.

A search perimeter was established, one of the sources said, after an officer saw someone entering a wooded area at nightfall Wednesday.

A tactical search team discovered human tracks and bloodhounds picked up the scent of the felons -- leading investigators to the area where the two men apparently bedded down. Wrappers found at that area were consistent with food wrappers from the prison commissary, according to the source.

The inmates knew Mitchell from her work tailoring clothes as an industrial training supervisor at Clinton Correctional Facility in Dannemora. She hasn't spoken publicly.

State Department of Corrections officials had received a complaint about the relationship between Joyce Mitchell and one of the two escapees, according to a state official. The department didn't find enough evidence to support the complaint, though that does not mean the inmate and prison worker weren't close.

\"I don't believe that the information was that there was absolutely no relationship,\" said Wylie, the district attorney.

Her cell phone was used to call people connected to Matt, according to another source, though it's not known who made these calls. And New York State Police Superintendent Joseph D'Amico said authorities believe she planned to pick up the inmates after their escape only to change her mind at the last minute.

Wylie speculated that perhaps Mitchell felt \"some responsibility and guilt ... and wants to help that situation or help herself.\"

\"She does not exercise her right to request an attorney, she voluntarily seeks us out,\" Wylie said Thursday night. \"(She) comes in and each day has been providing ... additional information that's assisted the investigators.\"

The information may have helped authorities figure out how the killers escaped, but so far it hasn't helped locate them.

Between 2002 and 2013, state data shows, almost every prison escapee in New York state was captured within 24 hours and none were out for more than three days. Until Matt and Sweat, who now have been on the lam for six days.

Their escape sent jitters across neighboring Vermont, where authorities believe they may have gone, and Canada, whose border is about 20 miles from the maximum-security prison.

Authorities in Texas, where Matt reportedly has an aunt, have asked officers to be on the lookout for the fugitive, according to a document obtained by CNN. The document further warns Matt has intentions of crossing into Mexico and says, \"Matt is familiar with ranchers on both sides of the border who allow illegal crossings to occur.\"

Still, the most intense law enforcement activity has been in northeast New York, where investigators continue to search for clues by painstakingly checking wooded areas and roads and popping open trunks at checkpoints. Officials said there have been no confirmed sightings of the escapees.

The ordeal has turned life upside down for those who call this rural, idyllic, out-of-the-way place home. Many people have restricted their movement, while classes in the Saranac Central School District -- which includes Dannemora -- were called off for a second straight day Friday \"to assist law enforcement and to keep our buses off the routes ... where they are searching,\" Superintendent Jonathan Parks said.

\"I haven't left home in two days, I had to call in to work today because you wouldn't be able to return back home,\" resident Brooke Lepage said. \"There were constant helicopters.

\"Last night they had floodlights. There was a recorded (telephone) message telling us to stay in the house and make sure outside lights were on.\"

More than 800 state, local and federal law enforcement officers have descended on the area, New York State Police said. They have been following more than 700 leads developed in the nearly weeklong manhunt.

Scent near a sandwich shop

Amid the mayhem, the search may be narrowing down -- the latest focus being a sandwich shop not far from where the convicts escaped.

Investigators are looking at surveillance video from a gas station about a mile away from the prison.

Tracking dogs picked up the scent of both prisoners at the station and followed it east toward the town of Cadyville, Wylie said. The gas station has a Subway sandwich shop, and the two might have been rummaging for food in the trash bin, authorities said.

Authorities are reviewing the limited security video from the store.

A perimeter is up around the site of the scent, and Wylie said \"dogs were working it (Thursday night) and we're going to continue to pursue that (Friday).\"

\"It could have been something that occurred earlier in the week,\" the district attorney said Friday of when the scent was left. \"But we're hoping that it was two nights ago, and they're closing in on the two men right now.\"

Investigators found an imprint from a shoe or boot as well as food wrappers in the area, a source said. And possible bedding -- an indent in the grass or leaves -- has also been discovered, according to the district attorney.

Will any of these efforts lead to Matt and Sweat, though? Wylie said Thursday night that he hoped they'll be found within 24 hours.

\"The perimeter is continuing to be closed in,\" the district attorney said Friday morning. \"And we hope ... that this will be effective in bringing these two men back into custody.\"