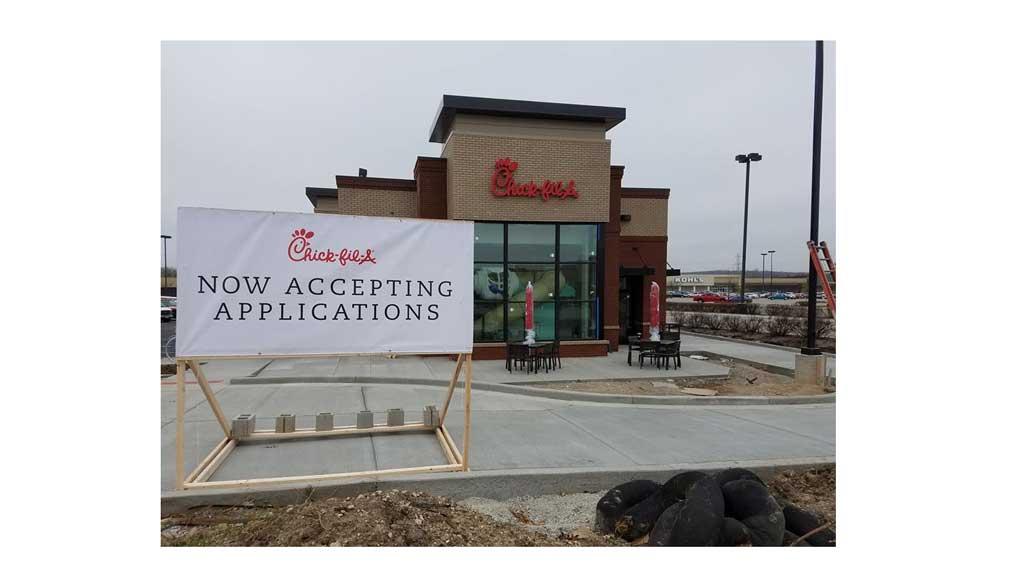 Local franchise owner David Schiedt will open metro-Milwaukee’s newest stand-alone Chick-fil-A restaurant in West Allis on December 8, bringing 85 new jobs, a chance for 100 adults to win free Chick-fil-A meals for a year and the opportunity for the community to donate children’s books to a local organization.

To celebrate the newest Chick-fil-A opening in the Wisconsin, all six Chick-fil-A locations in the state will give away a free three-count Chick-fil-A Chick-n-Minis to guests between 6:30 AM and 10:30 AM on Tuesday, December 6. No purchase is required and it is limited to one per customer.

The grand opening events at the new restaurant at 2645 S. 108th St. in West Allis will get under way on December 7 when a family friendly overnight First 100 party will pop up in the restaurant parking lot 24 hours before the grand opening as guests try to be one of the first 100 adults through the door to win a year of free Chick-fil-A meals. This community event is open to guests residing in specific zip codes surrounding the restaurant. A list of eligible zip codes and rules can be found at https://thechickenwire.chick-fil-a.com/News/Future-Openings.

A tradition going back more than 13 years, Chick-fil-A’s First 100 celebration has given away nearly $27 million in free food through 2015 and continues to be the chain’s signature grand opening event. Rain, snow and extreme temperatures below zero or above 100 do not deter Chick-fil-A fans who arrive with tents, chairs, TVs and computers.

Each fan hopes to win a digital offer card loaded with a one-year supply of free Chick-fil-A meals (52 meals with each consisting of a Chick-fil-A Chicken Sandwich, medium Waffle Potato Fries and a medium beverage) that will be awarded to the first 100 eligible adults - ages 18 and older with identification - in line when the doors open at 6 a.m. on Dec 8. If more than 100 people are on site when the line officially opens at 6 a.m. on Dec. 7, a drawing will be held to randomly select the First 100. Those chosen will be required to camp out until the grand opening in order to secure their spot.

“My team members and I can’t wait to welcome our guests to our West Allis restaurant,” said Schiedt. “We’re not just in the chicken business — we’re in the people business. Our goal is to provide a remarkable experience for every customer, every time, by serving food our guests can truly feel good about eating and providing sincere hospitality.”

Becoming a Chick-fil-A franchise owner is no small feat. The company receives some 24,000 applications yearly for approximately 100 franchise opportunities. Schiedt, new to the West Allis area, graduated from University of Georgia in 2011 with a major in Business Management. There he was an Academic All-American and received the Dick Bestwick Award, which honors the male senior athlete with the highest GPA. Schiedt began working for Aramark as a teen which allowed him to become familiar with Chick-fil-A and its culture. He always admired Chick-fil-A’s vision, focus on relationship building, and standards for excellence. Schiedt joined Chick-fil-A after graduating as a team member at an Atlanta restaurant before being offered the opportunity to join the chain’s interim manager program. In that role, he managed Chick-fil-A restaurants around the country for several years before being selected as the newest Wisconsin franchise owner. Schiedt is looking forward to serving the West Allis community and his guests.

Reflecting his desire to have a positive impact on the surrounding community, Schiedt is inviting his First 100 guests and restaurant customers to celebrate the new location by participating in a children’s book drive. Schiedt is collecting new and gently used children’s books at the restaurant between 6 a.m. and 10 p.m. on Dec. 7 and Dec. 8. The donated books will be placed in a nearly 3-foot Book House to serve as a free library exchange. The Book House, built from reclaimed wood, is donated by the Chick-fil-A Foundation (www.chick-fil-afoundation.org). Since 2014, Chick-fil-A has collected more than 27,000 children's books which have been donated to 162 local organizations in 37 states and Washington, D.C.

The new West Allis Chick-fil-A restaurant is the last of four new Wisconsin locations to open this year. Two opened in Mount Pleasant and Oak Creek in March, followed by the chain’s second Madison location in September. Together the four new restaurants will create upwards of 400 new jobs and bring the total of Chick-fil-A restaurants in Wisconsin to seven. The chain operated three mall locations in the state in various times before opening its first stand-alone restaurants in Greendale and Brookfield in September 2014. The newest Wisconsin restaurants are among 104

Chick-fil-A locations opening this year across the country, creating some 9,000 new jobs. For more information on the West Allis Chick-fil-A restaurant, find us on Facebook at https://www.facebook.com/ChickfilaWestAllisCenter/?hc_ref=SEARCH