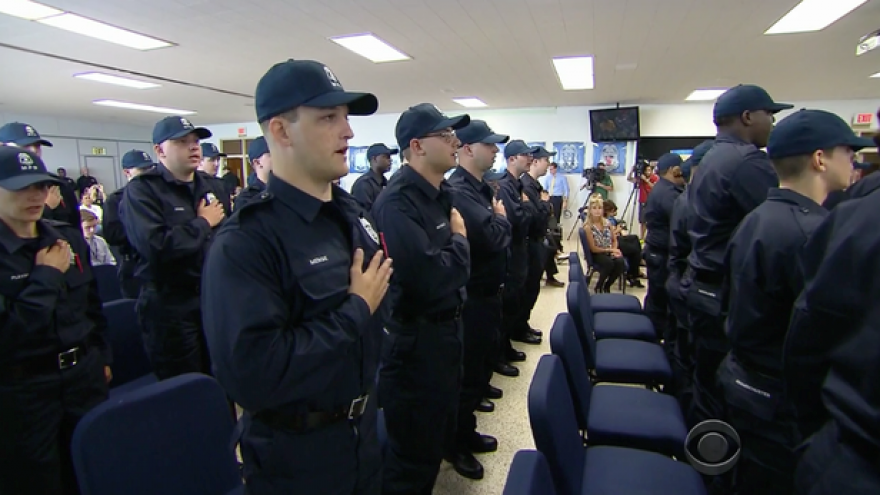 MILWAUKEE -- The Milwaukee Police Department was thrust into the national spotlight last year, following the fatal police shooting of Sylville Smith, who ran from a traffic stop while holding a gun. In June, the former officer who killed Smith was acquitted. Milwaukee's police force is now awaiting the results of a voluntary federal review of its policies, practices and training.

The 42 new recruits to the Milwaukee Police Department were sworn in last August, cleared for 27 weeks of training to see if they're really cut out to be cops, CBS News correspondent Dean Reynolds reports.

CBS News wanted to know why -- in this highly-charged environment between the police and those they have sworn to protect -- anyone would want such a demanding job.

"I like the idea of being able to help people when they're in, like, a crisis situation," Kluenker told Reynolds.

"Whether it's you know protecting individuals or helping individuals, I think it all kind of melds together, and it's really the same objective," Sharp said.

"So, if you're fully trained, correctly trained, the fear factor is diminished?" Reynolds asked.

Training like target practice and baton strikes, where whether learning routine traffic stops or entering empty rooms, the possibility of a dangerous encounter is always present.

Staci Steen has been instructing recruits here for five years.

"Ideally, we want as police officers to gain your cooperation through words and through just good human interaction to convince you to go along with the program," Steen said.

These recruits have to pass state tests covering more than 1,000 hours of training.

"Part of our job is to push their buttons, and to see, 'Hey, what is your limit here?' 'Are you going to be able to go out there, represent us as an organization and serve the city in a professional manner?'" Steen explained. "I'd rather find out here."

While the idea is to prepare them for what lies beyond the doors of the academy -- fate is fate.