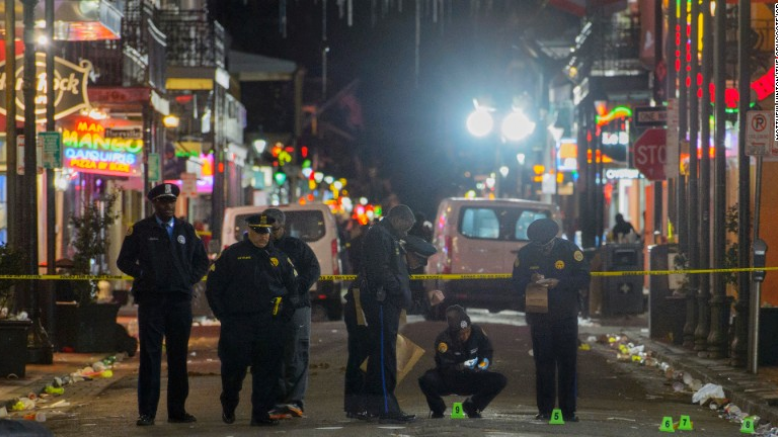 The shooting took place during the Bayou Classic Weekend, four days of events that include a parade and a college football game featuring Grambling State versus Southern University.

The two women and eight men shot were aged between 20 and 37, the New Orleans Police Department said in a statement.

Police received a call just before 1:30 a.m. local time reporting shots at the intersection of Bourbon and Iberville streets, near the western edge of the French Quarter.

The area is popular with tourists and was especially crowded because of the Thanksgiving weekend holiday and the football game, which had ended some six hours earlier in the Superdome, a short walk away.

"This was not the place or time to bring firearms to the Bayou Classic or any event," said Police Superintendent Michael Harrison, according to CNN affiliate WVUE. "This is not the place where something like this should happen."

Dozens of police, stationed in the neighborhood for Bayou Classic special events, responded to the call. Some officers heard the shots and ran toward the shooting scene, Harrison told CNN affiliate WDSU.

One male victim died in a hospital of his injuries, police said.

"It's totally unacceptable ... the violence just continues to spin out of control, with people brandishing weapons whenever they think they can," Mayor Mitch Landrieu told reporters. "It's just a tragic end to what was otherwise a beautiful weekend."

Police arrested two men at the scene for illegally carrying of weapons. One of them was identified as a victim in the shooting, police said, and was being treated for injuries. Officers also arrested another man for illegal possession of a handgun.

Harrison said he did not know what led to the shooting. Police said they were gathering evidence, including surveillance video footage, and were interviewing victims and witnesses.

"Anybody who has any information about what happened out here -- what you saw, what you heard -- we're asking you to call us," Harrison said.

CNN's Angela Dewan and Brandon Griggs contributed to this report.