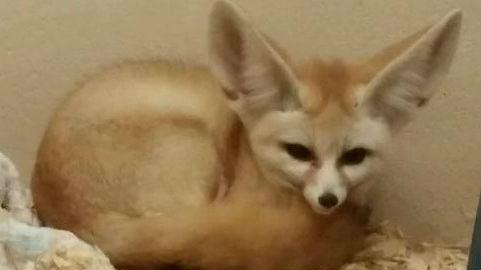 “We’re so excited to welcome such a wonderful little animal to our Zoo family and to the community,” said Beth Heidorn, Executive Director of the Racine Zoo. “He’ll make an excellent companion to Sahara and guests will enjoy seeing them both on exhibit next summer.”

Zorro was born at Walt Disney’s Animal Kingdom in March of 2012 and at six months of age, was sent to the Virginia Zoo to take part in the zoo’s breeding program. Zorro produced two offspring before being sent to Racine.

The fennec fox is the smallest fox in the world, weighing two to three pounds and approximately nine to 16 inches in length. Fennec foxes can be found in the Sahara Desert and in the deserts of Northern Africa and Northern Sinai. They have thick fur which keeps them warm during frigid cold nights and protects them from the heat of the day within their desert environment.

One noticeable characteristic of the fennec fox is its oversized ears, which are around six inches long. Their ears help to regulate their body temperature and keep them cool. Fennec foxes are nocturnal, spending daylight within their dens and becoming more active at night when temperatures are cooler.

Zorro arrives just in time for this weekend’s Winter of Wonder event, December 5-6 from 9:00 AM to 4:30 PM, when the Zoo celebrates cold-tolerant animals, the fennec foxes’ cousin, the Arctic fox and the Arctic hare.  Guests can enjoy fun games, kid’s crafts, delicious snactivities, specials at Max and Jenny’s Jungle Grill, and animal chats about Arctic foxes and hares so guests can learn more about what makes these animals unique and how they adapt so well to colder climates.