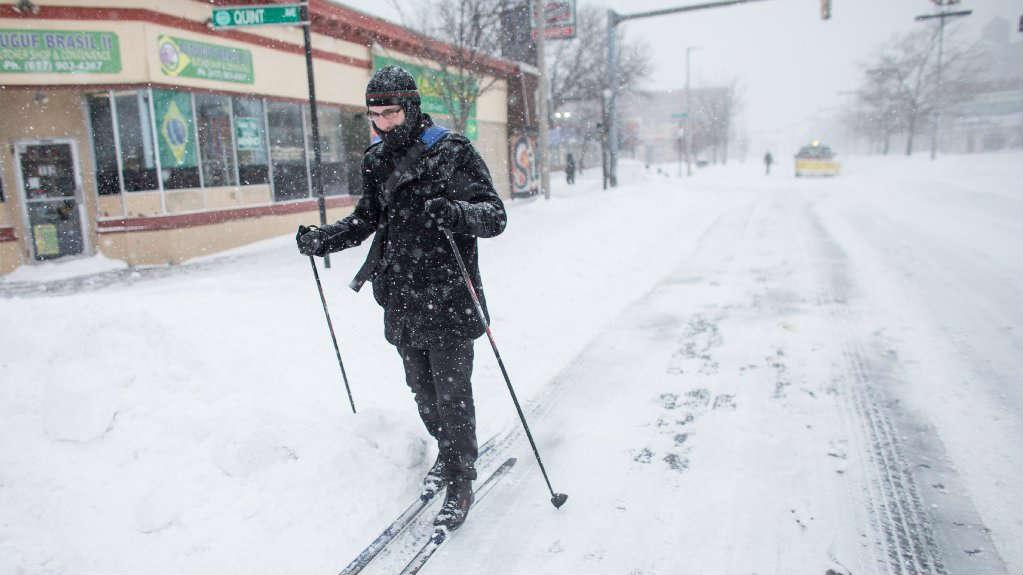 (CNN) -- For all the hype, Wednesday is turning out to be just another day in and around New York City.

But not in neighboring New England.

Winter or not, there's nothing normal for those from Connecticut to Massachusetts to New Hampshire who woke up to more than 30 inches of fresh snow. Or for those caught for up to 14 consecutive hours in a blizzard -- defined as heavy snows, sustained winds in excess of 35 mph and whiteout conditions. Or for the owners of 11 homes in Marshfield, Massachusetts, that suffered significant damage after a seawall breach.

For them, Wednesday isn't normal, but a day to start trying to get back to normal.

\"Unless there's a pressing reason to go out, this is ... a regroup day,\" said CNN homeland security analyst Juliette Kayyem, a Harvard professor who worked in the administrations of President Barack Obama and former Massachusetts Gov. Deval Patrick. \"And we'll be ready to rock tomorrow.\"

After deserting the streets Tuesday as the storm struck, traffic is moving again along major roads in the Bay State and beyond. The recovery continues in seaside locales that saw significant flooding. Boston's Logan Airport began accepting incoming flights around 8 a.m., according to spokesman Matthew Brelis. Buses and trains in Massachusetts -- including the Boston-area subway system, the \"T\" -- are running again, with major roads reopened as well, said incoming state Transportation Secretary Stephanie Pollack.

\"We're getting there,\" said New London, Connecticut, Mayor Daryl Justin Finizio on Wednesday. \"But it will be another day or two digging out from this. This isn't going anywhere.\"

As this comeback continues, so do the gripes -- including many from people who didn't get hit as hard as some expected.

Meteorologists in and around New York forecast 2 feet or more of snow. State and city officials amplified warnings about a \"crippling\" and \"historic\" blizzard, with roads closed to all but emergency vehicles, school and events called off, even New York's famed subway system shut down.

\"When I woke up, I expected the end of the world,\" said Roberto Gonzalez, who slept Monday night in a building's lobby because he got out of work too late to take the subway home. \"I went outside and nothing (had) happened. What storm?\"

Ten inches of snow in Central Park and a foot in parts of Queens and the Bronx isn't nothing. But it's also not the snowmageddon some had feared, based on all the sound and fury over the weekend. All that preparation is expensive, as is the cost of effectively shutting down America's biggest city to business for a weekday.

Meteorologist Gary Szatkowski, from the National Weather Service office in Mount Holly, New Jersey, tweeted he was sorry that he and others didn't \"get it right.\" He had plenty of company, with other forecasters like Dave Curren of News 12 New Jersey calling the errant predictions \"deflated as much as New England Patriots footballs.\"

CNN meteorologist Ivan Cabrera called it a \"bust\" for those who relied on the computer models that predicted a bigger storm around New York. Another model was more spot-on, once the snow settled.

\"I think we need to do a better job (explaining) the uncertainty in the modeling to the public,\" Cabrera said. \"So that you know there is a 'cone of uncertainty.'\"

Kayyem, though, thinks all the criticism is misguided. It's not as if the storm skirted New York entirely. And it's not as if officials wouldn't be lambasted if it had turned out the other way around -- if they had forecast a smaller storm, then a monster struck.

\"It was a big storm in certain areas. Because other areas didn't get hit, that's great news,\" Kayyem said. \"I don't understand what people are complaining about.\"

A harsh reality for those hit by feet of snow

If anyone has a right to complain, it's those digging out on Wednesday. They'd more likely take issue, though, with Old Man Winter than the weatherman.

The weather service reported that Orient, New York, on the tip of Long Island, ended up with 30 inches of snow. That's about 10 inches more than fell across Long Island Sound in New London, Connecticut, though Finizio noted that his city has up to 8-foot drifts and some roads that were still impassable Wednesday morning.

\"There are still a few dead ends that we still need to punch through to get to, to make sure that people can get out of their houses,\" the mayor said.

One good thing: Because it was colder than expected, most of the snow didn't weigh enough to snap too many limbs down onto too many power lines. So instead of 300,000 power outages in Massachusetts, as authorities had feared, the number topped out at 36,000, according to Massachusetts Emergency Management Agency spokesman Peter Judge.

\"Although we may end up with record snow, it's not going to be a record disaster -- which it could have very well been,\"Judge said.

Still, any outage can be deadly in a winter storm like this. And at one point an entire island, Nantucket, was in the dark.

Four hours after the power went out, Danielle Smith gave birth to her first child at Nantucket Cottage Hospital -- with a few lights on and some heat, thanks to the facility's generator.

\"And Danielle is a superstar,\" said Dr. Margaret Koehm, who noted that a \"blizzard girl\" joined Smith's \"blizzard boy\" Cayden a short time later at the same hospital. \"She did it all naturally.\"

In central Connecticut, Heather Klein felt her contractions coming on overnight Monday. After getting the OK from Hartford police to break the travel ban, she drove in and settled into the hospital in time for the birth of her baby, Anna.

Mom and baby had plenty of quality time together Tuesday, since visitors couldn't hit the roads to come see them.

The Iraq war veteran had evacuated to a friend's house overnight, knowing that things might not be safe in her own home of Marshfield, a town of 25,000 located 30 miles south of Boston.

When she got back home, the National Guard sergeant broke down in tears.

\"Part of the roof collapsed, the wall, my door was missing,\" Bruno said of her house. \"It was just destroyed.\"

She wasn't alone, as 10 other homes in the same seaside town were also damaged after the powerful storm tore down about 50 feet of seawall. Two of the houses were damaged badly enough to be condemned.

There was significant flooding there and in other coastal communities around Massachusetts, which had to deal not only with storm surges but lashing winds that in some places topped 75 mph.

Even so, there is also recognition that -- for the vast majority of the 58 million people in the storm's path, especially given the dire warnings -- it could have been even worse.

\"Despite the fact that we had record-breaking snowfall in many parts of Massachusetts,\" Gov. Charlie Baker said Wednesday, \"we have come out of this, I think, in relatively good shape.\"