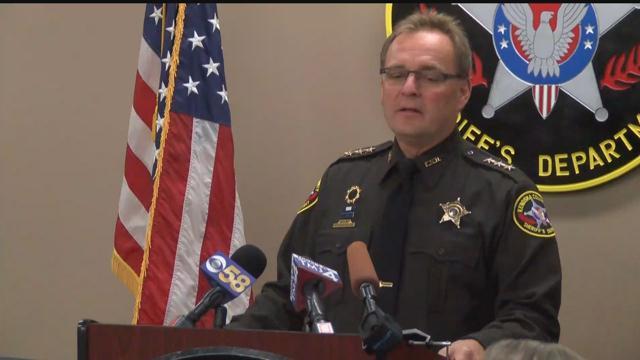 Paddock Lake, a Kenosha County Village with a population of a little more than 3,000 is where a man was shot by a sheriff's deputy.

The Kenosha County Sheriff's Department has now released the name of the man who died in Saturday's shooting as Darren Fude, a resident of Paddock Lake.

Now outside authorities with the Department of Criminal Investigations has taken over looking at the evidence. Using metal detectors, state authorities comb through grass across the street from the home where the shooting happened.

"When I heard the gunshots I actually backed up into the house...I did not hear any women or children yelling. I just mostly heard men yelling," says neighbor Tira Kubas. The shooting scene is basically in Kubas's backyard.

She says she was on her deck at the time, "all night long, I had a hard time sleeping last night too, I wonder if there was more to this situation that we aren't aware of."

Kenosha County Sheriff David Beth says the deputy who fired the shots Saturday night has not yet been interviewed about what happened, so his name is not being released.

What Sheriff Beth did say is the case started with a traffic issue. Mr. Fude wrecked his bike and authorities went to his home to ask questions.

Sheriff Beth says Fude brought out a shotgun as deputies spoke to his wife, "Mr. Fude pointed the shotgun in the direction of two of the deputies standing near an evergreen tree. And at that point one of our deputies fired multiple rounds striking Mr. Fude and he fell to the ground."

Fude would later die at St. Catherine's hospital leaving behind a wife and children.

"I gave Mrs. Fude a hug and I said I'm really sorry how all this came out and worked like this. And I talked to the little girl sitting on the floor, a little fourth grader, and she was writing in a little pink notebook little notes,” says an emotional Sheriff.

"You don't want any child to grow up without a father," added Sheriff Beth. Authorities say Fude had no real run-ins with police until Saturday night.

Sheriff Beth says an autopsy is being performed on Darren Fude Sunday.

A toxicology report should be complete in the upcoming days.