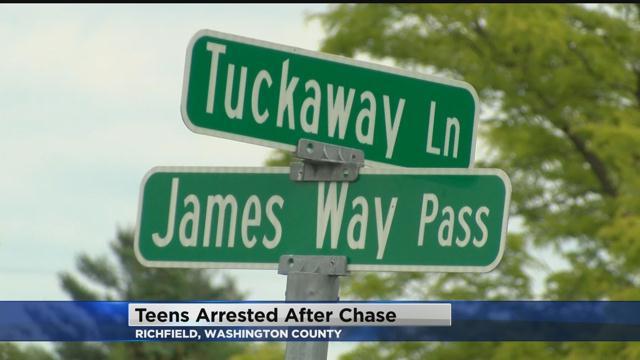 A high speed chase that began in Milwaukee ends all the way in Washington County.

Police find the car is full of teenagers wanted for a carjacking.

It was a concerned citizen who spotted the suspect vehicle near Highway 164 and Monches Road just before five this morning.

The search in the neighborhood dragged on for hours.

Neighbors in this Richfield neighborhood tell me around two-dozen officers.

With huge tactical vehicles and other equipment started making a sweep of this area sometime after 1 AM.

The subjects of this search were five minors. Four were 15-year-olds and one 17-year-old.

They are accused of carjacking a woman yesterday afternoon.

And leading police on a high speed chase before abandoning that vehicle near Tuckaway Lane just off of Highway 164.

Neighbors said authorities bang on their doors to give them the warning about what was happening.

"When they brought the tactical team out, I looked out and I could see this big military vehicle with search lights on top. And there was no less than 20 guys, officers, standing at the bottom there. They were obviously having a meeting. Then they started hitting the backyards again. And this time they had like a humvee - what they use over in Iraq,” Greg Lohr / Homeowner said.

The Washington County Sheriff's department reports the group of suspects was arrested sometime after 4:45 this morning.

"It's like one of the last things you expect to see out here in Washington County in Richfield - seeing an armed robbery high speed chase and a crash," said another neighbor.