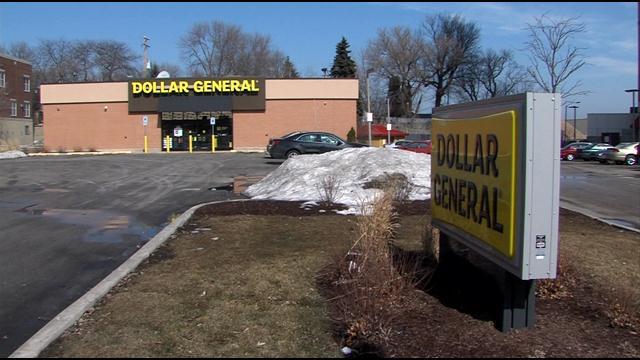 The 20-year old suspect, who was shot and wounded by a Milwaukee police officer, remains in Froedhert Hospital with serious injuries.

On Monday (March 9) two officers responded to an armed robbery at the Dollar General on Locust Street. One officer shot the suspect and then the suspect shot himself, according to police.

The Milwaukee Police Department hasn't released the name of the suspect or the officer. The suspect does have an arrest record. He's on probation for a 2013 disorderly conduct case.

Jean Jones lives at the Locust Court apartment complex next door to the store. She said she goes to the Dollar General often since it's convenient.

Jones said she talked to one of the clerk's that was in the store when the attempted robbery took place.

\"She saw him come from the park that way,” Jones said. “He had a hood on and someone who lives in front was coming to the store, she immediately told him to call 911 and he did, then the cops came and then everything happened.\"

Jones said the neighbors were concerned about the clerks.

\"She was very scared,” Jones said. “She was there when it happened.”

“”She just came over here to talk to us and we were all worried about how she was doing,\" she said.

Jones said she understands why the officer fired his weapon.

Delores Russell also lives near the Dollar General. \"It makes me very nervous because it's a very safe neighborhood,” she said. “I've lived here for three years.\"

While the Department of Justice steps in to investigate, Russell said her day will go on.

\"I'm not going to change my routine, it's over with,” Russell said. “Hopefully it won't happen again.\"

The store has surveillance cameras. However, Jones said adding more security could help.

\"With all of those young people working in there, there's never any security around there. I think they need a security guard, they don't have that,\" she said.

The Dollar General remained closed all morning and opened around 12:30 p.m. Tuesday. CBS58 reached out to them for comment and they directed any questions to police.