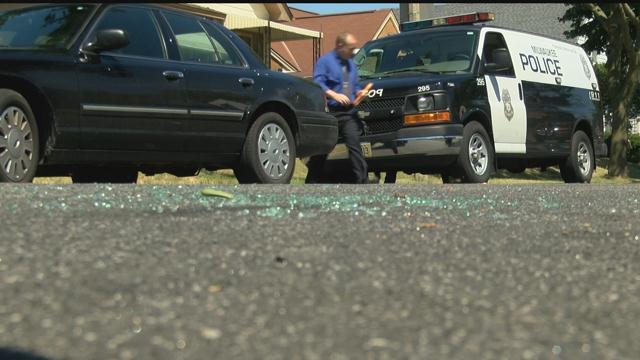 Many on the 3500 block of South 17th Street woke up to gunshots.

It was 2 a.m. when someone shot at Milwaukee Police officer Brandon Baranowski.

"I heard five shots, and then you can hear somebody screaming that they were shot," said Pam.

Pam lives near the incident, and heard the aftermath of the shooting.

"It was a high-pitched scream," said Pam.

Milwaukee Police were called to the area for a domestic dispute. The suspect was gone when they arrived. At 2:00 a.m., someone fired several shots at Officer Brandon Baranowski. Baranowski was in his parked squad car finishing the investigation.

After she heard the initial shots, Pam was too scared to go downstairs.

"An hour later, maybe sooner, you heard one single shot and you saw a whole bunch of police there up on this porch," said Pam.

At 2:30 a.m. officers heard a single gunshot. They found a 20-year-old West Allis man dead from a self-inflicted gunshot. The man dead was the suspect in the domestic dispute, and police believe he shot at Officer Baranowski. Police are waiting for ballistics to confirm he was the shooter.

Pam says the scene didn't calm down until 5 a.m. She said it was one of the scariest moments she's heard.

"I was scared; I'll probably still be shook up tonight," said Pam.