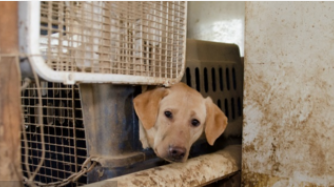 Officials rescued dozens of dogs from a puppy mill in northwestern Wisconsin, according to a news release.

The American Society for the Prevention of Cruelty to Animals and the Pierce County Sheriff's Office booked the owner of a facility in Elmwood Friday after searching the property on a warrant.

ASPCA workers and deputies found 35 adult dogs and 13 puppies, all yellow Labradors, living indoors in small, filthy travel crates with no access to food or water, according to a news release. Several dead animals were also found on the property. The ASPCA said the facility is a puppy mill--a large-scale breeding operation designed to generate profits at the cost of the animals’ health and well-being.

Kathryn Destreza, director of investigations for ASPCA Field Investigations and Response, said dogs kept at breeding facilities like the one in Elmwood suffer a poor quality of life.

“What we saw here is no way for a dog to live,” Destreza said. “The puppies at breeding facilities are sold for profit, but many people don’t realize that their parents are often kept there for years, subjected to incessant breeding and usually lacking basic care and socialization.”

Pierce County Sheriff Nancy Hove said when the department is made aware of animal cruelty issues, authorities do the best they can to investigate and hold anyone responsible accountable.

“Large scale animal cruelty cases are not something that we encounter often here in Pierce County,” Hove said. “This case started with a complaint from a concerned citizen who was appalled by the conditions these animals were exposed to."

Hove said deputies responded to the complaint and determined the allegations had merit.

The sheriff's office encouraged citizens to contact law enforcement if they see a situation that is questionable.

The dogs from the Elmwood facility were taken to the Animal Humane Society in Golden Valley, Minnesota, where they are receiving urgent medical treatment.

The ASPCA said the dogs are considered evidence and will be cared for by AHS responders until their custody is determined by the court. The ASPCA is also collecting forensic evidence and providing legal support to strengthen the case and ensure the best legal outcome for these dogs.

The dogs were seized from the property Friday morning after warrants were served, and the owner of the facility was booked into the Pierce County Jail for mistreatment of animals, not providing proper food to confined animals and improper animal sheltering, according to the release.