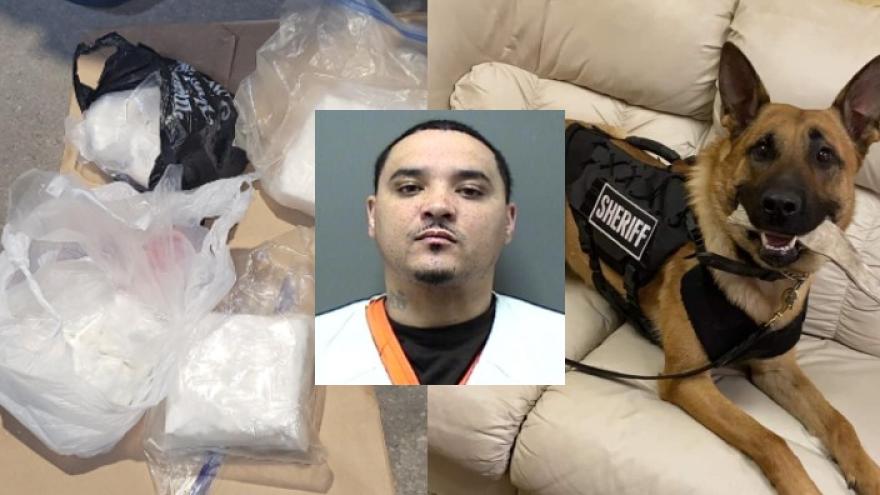 Officials say just before 10 a.m., a deputy pulled over a vehicle for a traffic violation on northbound I-94. During the stop, the operator -- later identified as Ramone Locke -- provided conflicting information, raising the deputy's suspicion.

Once back-up arrived, K-9 deputy Zeke conducted an open-air sniff around the vehicle and detected the presence of contraband. Deputies searched the vehicle and located a hidden compartment. The vehicle was subsequently dismantled at the sheriff's substation and after several hours, deputies were able to remove over two kilograms, or nearly four and a half pounds of cocaine that also tested positive for fentanyl.

Authorities say the estimated street value of the cocaine is over $110,000.

Locke was taken to the Racine County Jail and held on multiple felony drug related charges.

“I am extremely proud of the work done by the deputies involved in this case," said Sheriff Schmaling. "From a simple traffic stop, the deputy performed an interview of the driver who gave answers that aroused the deputy’s suspicions.  The back-up deputy used K-9 Zeke to establish probable cause of the presence of contraband, and the deputies thoroughly and meticulously searched the vehicle – ultimately defeating a sophisticated trap compartment to locate the fentanyl laced cocaine. I have grave concerns that a person facing such serious charges was out on the streets peddling nearly four-and-a-half pounds of this poison. It is impossible to measure the number of lives saved by these deputies, but I do know that fentanyl poisoning is the leading cause of death for Americans aged 18 to 45, and over 107,000 Americans died of overdoses last year alone. These are not just drug cases; these are potential homicides!”