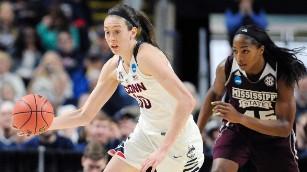 No. 1 UConn won the NCAA women's basketball championship on Tuesday with an 82-51 thumping against No. 4 seed Syracuse at Bankers Life Fieldhouse in Indianapolis.

This doesn't come as a shock, as UConn (38-0) now has 11 titles, all under head coach Geno Auriemma.

But the amount of history that comes with this one win is tremendous.

"There's three key ingredients that go into this kind of success," Auriemma said to ESPN's Holly Rowe on court after the game, pointing at Stewart, Jefferson and Tuck. "One, two, three."

Stewart, already the most decorated women's college basketball player in history, led the Huskies with 24 points and 10 rebounds and was named the Final Four Most Outstanding Player for a record fourth time. To put that in perspective, no one else has ever won that award three times.

Stewart, who grew up in Syracuse, also has bold predictions. When she was a freshman, she said that she would win four championships with UConn. A bold statement considering that had never had been done before.

"It's unbelievable," Stewart said. "That was our goal coming in here once we were freshmen. To carry it out and win like this as seniors is unbelievable."UConn's winning streak now is 75 games, the second longest streak in NCAA history. The Huskies (38-0), of course, have the all-time record of 90 straight from November 16, 2008, until December 29, 2010.

The Huskies don't just win games; they dominate them. They won every game this season by double digits. Heading into Tuesday's championship game, they had routed their opponents by 52, 46, 60, 21 and 29 points in this year's NCAA tournament. In the title game, they won by 31.

Tuesday was another one of those nights. The offensive output of Stewart, Jefferson and Tuck outscored Syracuse by themselves in the first two quarters, combining for 38 points as UConn took a 50-23 halftime lead.

It was a daunting task for Syracuse (30-8). The Orange had never played for a national title before Tuesday, and this was the first time they had reached the Final Four.

But though the final score may not show it, Syracuse didn't quit. Despite being down 27 points at halftime, the Orange went on a 16-0 run to cut the lead to 60-43 with 2:14 left in the third quarter. The Orange actually outscored the Huskies in the period, 20-14.