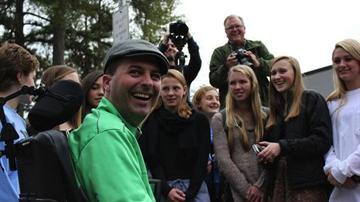 DURHAM, N.C.(CBS) -- Chris Rosati is both in the prime of his life and at the end of it. About a year ago, this 42-year-old marketing vice president and father of two was diagnosed with ALS -- Lou Gehrig’s Disease.

It’s obviously heartbreaking, but it’s hardly the focus around here. In fact, after Chris found out, he did something few people with a terminal illness ever choose to do: he applied online for a job as a donut delivery man -- seriously.

“I knew I wouldn’t get the job, but at least then I could say when they arrested me, ‘Hey, man, I applied,’” Chris says.

When they arrested him?

“Then the next step is to try to steal a truck,” he says.

That’s right, he said steal a truck. It was all part of this fantasy Chris dreamed up: to stake out the Krispy Kreme donut factory near where he lives in Durham, N.C., follow one of the drivers on a route and take his truck when the guy’s not looking.

“And then just go around and give away the donuts,” he explains.

Kind of like a Robin Hood thing -- stealing cholesterol from the rich and giving it to the poor.

“I was going to go to the nearest school,” Chris says.

The plan had some had some holes in it, and not just because of the donuts. He was just going to pull up to a school and say, “Oh, here everybody, here’s a bunch of donuts”?

“Yeah, now that you say that, it probably wouldn’t work,” Chris laughs.

Not to mention the legal ramifications.

“One of the blessings of ALS is -- what are they going to do?” Chris says.

In case you haven’t figured out, Chris has a remarkable sense of humor about this. Which is partly why, when Krispy Kreme heard about his plotting through a Facebook post, they didn’t threaten prosecution. Instead, they offered transportation. Specifically, a bus -- a bus stocked with donuts.

And so, for an entire day, Chris, his   family and friends went on this rolling sugar high, joyfully delivering to city parks, cancer wards and children’s hospitals.

“We’re glad to make some people smile,” he says.

But the biggest smile of the day belonged to Chris himself. Remember his original dream was to show up at a school -- and here he was, at his old high school.

Which leads us to what this was really all about. Chris says if dying has taught him anything, it’s about how to live. He says you have to do what you can to make people smile while you still have the chance. He really wants kids, especially, to know that.

“Because if I can’t impact people, this whole thing is a waste,” he says.