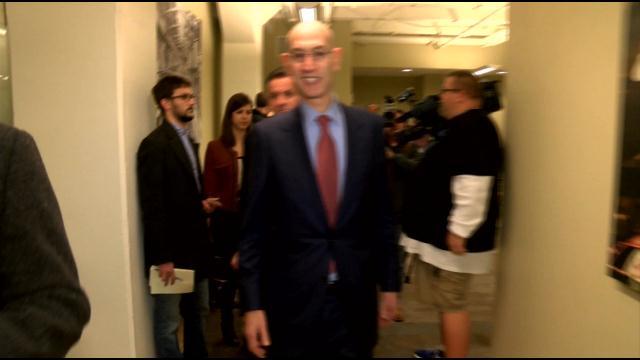 The Milwaukee Bucks took on the Detroit Pistons tonight at the BMO Harris Bradley Center on Tuesday night, but Milwaukee's real NBA power players were meeting behind closed doors, talking about building a new arena.

Three men who may ultimately decide if the Bucks stay in Milwaukee-- NBA Commissioner Adam Silver, Milwaukee Mayor Tom Barrett, and Bucks co-owner Wes Edens met Tuesday in Schlitz Park, which will soon to be the new headquarters for the team.   Addressing the media after the meeting, Silver says he is satisfied with the progress being made towards building a new arena. \"The people, the fans, the politicians, the elected officials recognize what value this team brings to the community,\" he said.

Mayor Barrett said the meeting focused on where the new arena will go, and coming up with a plan to pay for it.  No site for the proposed arena has been announced, but the Bucks co-owner seemed eager to make that decision. \"We get a site nailed down in the next 30 days or so-- that gives us a chance to design and figure out exactly what we want to build,\" Edens said.

No progress on a location, but a plan to pay for the new arena may have emerged. Barrett says the so-called \"jock tax\" is gaining popularity. The idea is to divert the income taxes generated by NBA players here to finance the arena.  \"I definitely think that is the most feasible form of state cooperation,\" Barrett said.

According to Barrett, approximately $10.7 million is generated by by income taxes for NBA players here in the state of Wisconsin. \"If the Bucks are not here, those players will be paying income taxes in a different state,\" he said.

The deadline is looming, build a new arena by 2017 or face the possibility of the Bucks moving to another city.  But right now, the NBA commissioner is saying publicly that the arena will be built and the team is staying put. \"I'm satisfied that they're moving along at a good pace, I feel very confident this is going to get done,\" he said.
Share this article: