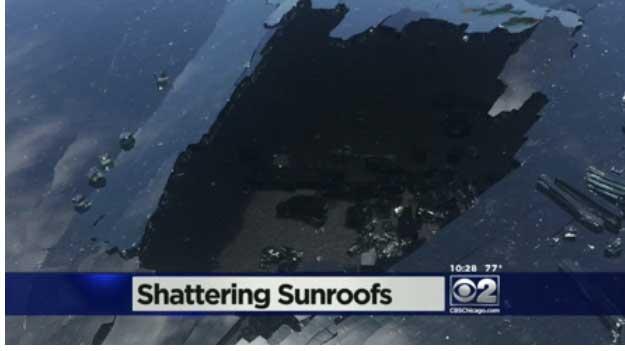 CBS 2 has learned so-called exploding sunroofs are the focus of an ongoing probe by the National Highway Traffic Safety Administration.

The agency has received hundreds of complaints about shattering sunroofs, including ones in Chryslers.

Currently, the NHTSA is investigating Kia sunroofs, but officially seeking more information from four other manufacturers.

A woman in Indiana told CBS 2 her sunroof exploded while driving.

The sunroof of Lesniewski’s Chrysler Town & Country minivan shattered on the expressway, with three of her children riding with her.

“It sounded like there was bomb inside my car that had gone off. It was so loud,” she said.

Her 6-year-old Amya said she was so scared, she started crying.

Lesniewski said, when she pulled the partition back, she saw a gaping hole, along with shards of glass.

Lesniewski said her Chrysler dealership refused to cover repairs, blaming it on a pebble.

As for manufacturer liability, he said, “if they have a lot of these types of problems, then that strengthens the argument for it being a manufacturer problem.”