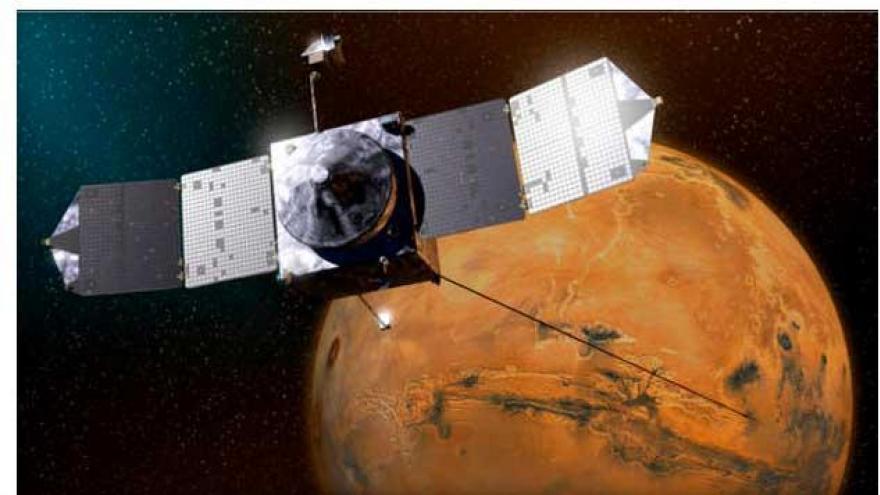 The MAVEN spacecraft — short for Mars Atmosphere and Volatile EvolutioN — has been orbiting Mars for more than two years, monitoring the Red Planet’s atmosphere. On Feb. 28, it performed a rocket motor burn to speed up just a little bit and change trajectories to avoid crossing paths with Phobos, NASA officials said in a statement. The total speedup was just 0.4 meters per second, which is less than 1 mile per hour.

Researchers noticed that Phobos and MAVEN had a chance of colliding March 6. That gave them a week of advance notice in order to pull off the small maneuver to avoid a crash. Now, the two will miss each other by about 2.5 minutes (before, their orbits were crossing the same point within just 7 seconds of each other). This is the first time the spacecraft has moved to avoid encountering Phobos, officials said in the statement. [Mars Photos from NASA’s MAVEN Probe]

“Kudos to the [Jet Propulsion Laboratory] navigation and tracking teams for watching out for possible collisions every day of the year, and to the MAVEN spacecraft team for carrying out the maneuver flawlessly,” Bruce Jakosky, MAVEN principal investigator and researcher at the University of Colorado in Boulder, said in the statement.

Phobos is a lumpy, asteroid-size moon orbiting very close to Mars, streaked with stretch-mark grooves. Phobos and its slightly smaller sister moon Deimos are both dark gray, which makes them among the least reflective objects in the solar system. Phobos has been moving closer to Mars over time and is destined for an eventual descent into the planet — one collision that moon won’t avoid.