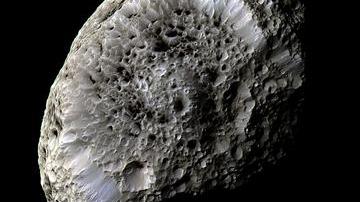 A spacecraft exploring the Saturn system was zapped by static electricity sent out by one of the ringed wonder's many moons in 2005, a new study suggests. In fact, scientists have found that the Cassini spacecraft was \"briefly bathed in a beam of electrons\" coming from the moon Hyperion's surface, NASA officials said. No, this isn't proof of alien life: The particle beam was likely generated by the odd, porous moon's exposure to ultraviolet radiation from the sun and Saturn's magnetic field, researchers said.

\"It was rather like Cassini receiving a 200-volt electric shock from Hyperion, even though they were over 2,000 kilometers [1,200 miles] apart at the time,\" Tom Nordheim, a doctoral candidate at Mullard Space Science Laboratory (MSSL), University College London, said of the new finding in a statement.