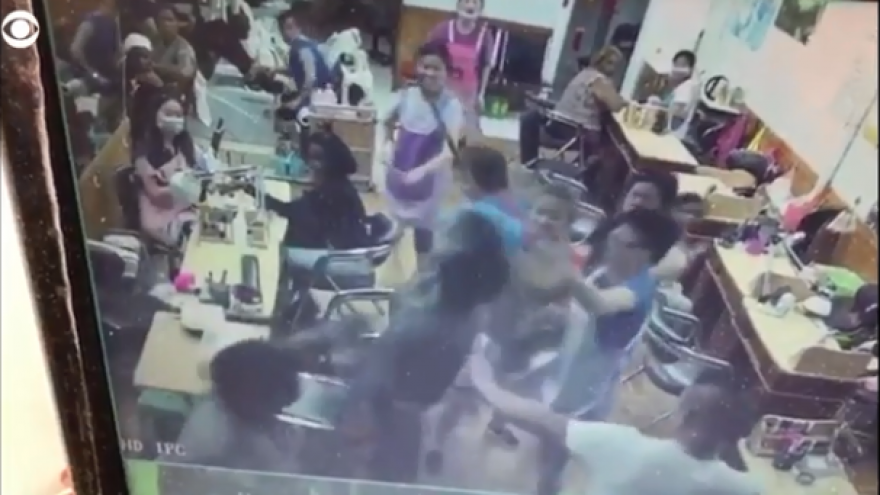 NEW YORK -- Community members are calling for a Brooklyn nail salon to close its doors for good after a brawl on Friday was caught on video, CBS New York reported. The release of video of the incident at the Happy Red Apple Nail Salon led to protests outside the salon on Monday.

Reports say that the protests are racially tinged.

"You couldn't pay me to come back here," said resident Crystal Harper.

Police said the fight broke out Friday night after customer Christina Thomas complained about her eyebrow service and refused to pay $5.

Police said Thomas hit an employee, who then in turn struck the customer with a broom. Both Thomas and the employee, Huiyue Zheng, were arrested.

According to the nail association, an employee told them Thomas refused to pay for any of the other services she received, telling CBS New York that the altercation could have easily been avoided.

"They're not supposed to fight like that, for both sides that is totally wrong," a representative from the association said.

The salon was open for business on Monday but closed early, with police escorting workers to a waiting van. They left behind a shuttered salon and protesters hoping it stays that way.

The Washington Post reports the incident has intensified racial tensions. Some protesters urged black residents in the neighborhood not spent their money at the salon. One sign read "Black $$$ Matter."

The salon is located on the edge of a Brooklyn neighborhood called East Flatbush, which is 86 percent black and one percent Asian, according to Census data.

"There is no respect for people in this neighborhood," said 49-year-old Gavin Gibbs, a neighborhood resident, the New York Daily News reported. "Anytime a store doesn't respect us, we're going to shut it down. We will come, we will picket it and we'll do whatever we have to close your store down."

While many protesters said they sought to see the salon shut down, others also said their goal was to bring attention to mistreatment of black residents, specifically tensions between the Asian and black communities, The New York Times reported.

"The black community has been pushed aside for generations, and it just seems as if the longer time goes on, the more people think we're simply going to go away," said 33-year-old Alexis Regnier, the Times reported.

It was unclear if the salon would reopen on Tuesday