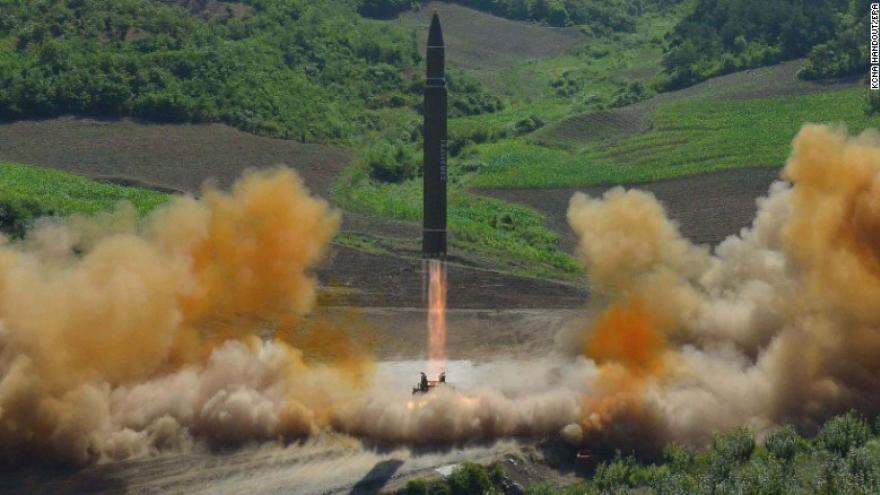 SEOUL, South Korea -- North Korea on Tuesday launched yet another ballistic missile from its western coast in the direction of Japan, South Korean officials said, part of a string of recent test-firings as the North works to build a nuclear-tipped missile that could reach the United States.

The South's Joint Chiefs of Staff said in a statement that the launch, which came before the U.S. celebration of its national independence, was made from North Phyongan province. Other details were scarce. It wasn't immediately clear if this was a routine firing of a short-range missile or an attempt to perfect

But South Korean President Moon Jae-in said the military was analyzing the possibility that the missile might have been an intercontinental ballistic rocket, according to the Reuters news agency.

Pyongyang said it would be making an "important announcment" Tuesday afternoon local time.

Chief Cabinet Secretary Yoshihide Suga told reporters the missile was fired around 9:40 a.m. Tuesday and flew for 40 minutes before landing in the Sea of Japan within waters where Japan claims economic rights.

He said no damage to aircraft or ships has been reported. Japanese media said the coast guard had cautioned ships about potential falling objects.

Late Monday evening, President Trump took to Twitter to criticize North Korea's leader Kim Jong Un saying, "Does this guy have anything better to do with his life?"

"Hard to believe that South Korea and Japan will put up with this much longer," Mr. Trump added on Twitter. "Perhaps China will put a heavy move on North Korea and end this nonsense once and for all!"

Just last week Moon and Mr. Trump focused much of their first meeting on opposing North Korea's development of atomic weapons that threaten both allies.

U.S. Pacific Command released a statement to CBS News that said it detected and tracked what it assesses was a North Korean missile launch at 2:40 p.m. Hawaii time. They say it was a single launch of a land-based, intermediate range ballistic missile and occurred near the Panghyon Airfield.

The missile was tracked for 37 minutes and landed in the Sea of Japan, U.S. Pacific Command reports.

It added in the statement that the North American Aerospace Defense Command (NORAD) assessed the missile launch didn't pose a threat to North America.

Japan's Prime Minister Shinzo Abe sharply criticized North Korea for the launch, adding it was a reminder that Pyongyang's missile development is a growing threat.

"North Korea once again forced its missile launch despite a repeated warning from the international society," Abe said. "The latest launch clearly showed that the threat is growing."

Abe, who talked by phone with Mr. Trump on Monday, said the two leaders reaffirmed their strong cooperation and that they plan to seek further cooperation by the international society when they attend the G20 summit in Germany.

China's U.N. ambassador, Liu Jieyi, warned Monday that further escalation of already high tensions with North Korea risks getting out of control, "and the consequences would be disastrous."

Permanent members of the United Nations Security Council, including the United States, have made clear that there will not be significant new sanctions on North Korea unless they conduct a nuclear test, in defiance of U.N. Sanctions, CBS News' Pamela Falk reports.

Meanwhile, the not-unusual testing of ballistic missiles by Pyongyang on U.S. holidays sends a message to policymakers that North Korea wants to remain on the front burner of international crises issues.

The Korean Peninsula has been divided between the American-backed South and the authoritarian North since the 1950-53 Korean War. Worries have increased as the North's leader Kim Jong Un pushes to expand his nuclear arsenal and develop ballistic missiles that can carry nuclear warheads.

Tuesday's launch is the first by the North since a June 8 test of a new type of cruise missile that Pyongyang says is capable of striking U.S. and South Korean warships "at will."

Since taking office on May 10, Moon has tried to improve strained ties with North Korea, but the North has continued its missile tests. Pyongyang says it needs nuclear weapons and powerful missiles to cope with what it calls rising U.S. military threats.