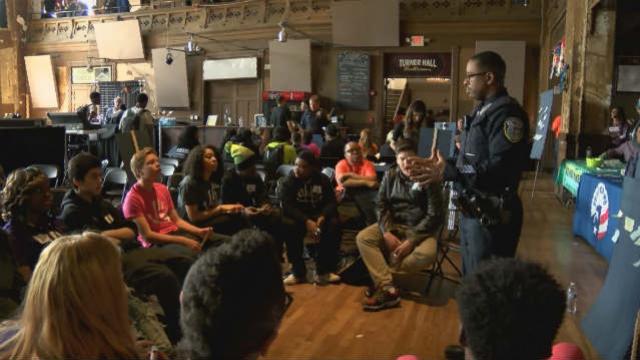 Hundreds of students from 11 Milwaukee Public Schools participated in a Peace Summit on Monday at Turner Hall Ballroom.

This is the second year that the organization \"Arts at Large\" hosts the summit called \"Serve2Unite.\"

As part of the event, students were able to interact with Milwaukee Police Officers and ask any questions they may have.

\"It's great to have that interaction,\" said Milwaukee Police Officer Cornelius Taylor, who's been with the department for 24 years. \"The relationship building... that's the most important for me.\"

It's an opportunity for students to get to know what police officers do on a daily basis and also, a a chance for them to clear out the negative perceptions youth have about police.

\"There's a lot of stereotypes... especially with the milwaukee police department about whether they are good or not and it's important that we talk to them and have conversations and have questions answered,\" said Makayla Knapp, an 8th grader at Fernwood Montessori School.

Officer Taylor believes having those conversations with students like Makayla, is key to create a positive relationship between police and the community.

\"That's the first thing in having them understand officer perspective, so they don't have any misconception of what are we doing,\" said officer Taylor.

The interaction between these students and police officers doesn't end at the event. Officer Taylor is part of a program called S.T.O.P, which allows him to visit schools in the area and establish these kinds of connections with youth.