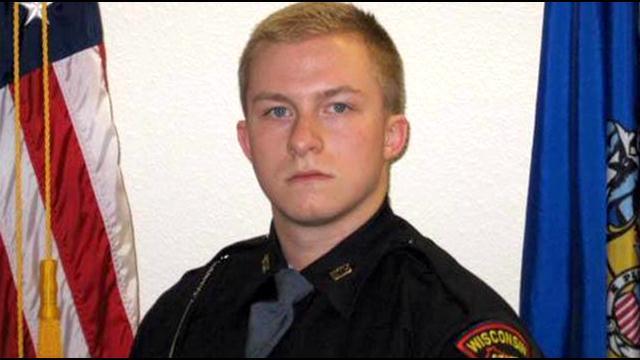 The procession and funeral for Wisconsin State Patrol Trooper Trevor Casper was held Monday morning in the city of Kiel.

Casper, 21, was killed in the line of duty during a shootout with a suspected bank robber in Fond du Lac last week.

Hundreds turned out Sunday for a memorial service at his alma mater Kiel High School.

Casper's burial service Monday was private, but his hometown community didn't hold back their public display of affection.

Mourners, young and old, lined the streets to honor the fallen law enforcement officer as a silver hearse carried his body through downtown.

Their heavy hearts held signs and waved American flag to show support to the grieving family.

A sea of blue state trooper cars followed close behind family during a patriotic escort to Casper's final resting place.

The close knit community of Kiel is remembering Trooper Casper as the fun-loving man who never shied away from helping others.

But that spirit is also resonating across the state with strangers, who made it a priority to be in Kiel, to thank him for his sacrifice.

\"I don't know what else to say here. What can you say?\" said Jane Pethan, who knows the family. \"It was a life cut short. I'm proud of him. It's what he wanted to do since he was a little kid. I just wish he could've done it a longer time.\"

\"I think Trevor's legacy will be a mentoring to our grandson and a lot of other fine boys and girls. He seemed to to everything right,\" said Brenda Weber from Appleton.

Trooper Casper was laid to rest at S.S. Peter and Paul Cemetery.

A memorial fund has been set up through the National Exchange Bank and Trust.