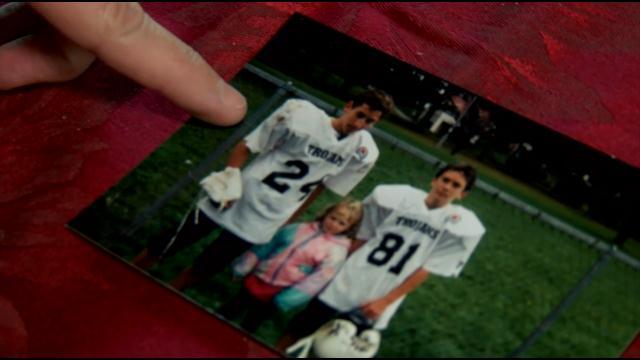 This is how Debra Pyka remembers her son Joseph.

Debra said her son was smart, athletic, and fun to be around. However, things suddenly changed in college.

\"I think his brother noticed something sooner but didn't know what was going on either. It was when he wasn't going to school,\" Debra said.

Instead Joseph was at his mother's home in the town of Hixton, in western Wisconsin. Something was eating away at him, and his mental state was quickly going downhill.

\"One night I stood at his door and told him you're not going to die before me. He just had a blank look in his eyes, he didn't even answer me,\" Debra said.

At 25 years old, Joseph Pyka committed suicide. A brain autopsy done a year later finally showed he had a severe a brain condition called Chronic Traumatic Encephalopathy, also known as CTE. Researchers say the condition is caused by multiple concussions, and it can completely change the person years later.

\"Pop Warner is the largest football organization in the world And they're exposing the ones who are most vulnerable,\" Gordon Johnson, Pyka's attorney said.

Pyka filed a lawsuit against Pop Warner Football this week in Madison, accusing the youth football organization of playing a part in Joseph's death. Before he played high school football, Joseph played four years of Pop Warner at ages 11, 12, 13 and 14. That's where Debra says her son's eventual CTE began.

Pop Warner Football released a statement on Friday, saying “This is a terrible tragedy, and our hearts go out to Joseph's family. Pop Warner has been, and will continue to be, at the forefront of addressing player safety. We have implemented significant rule changes and medical protocols as we constantly look at how to make the game as safe as possible for children. In addition, we emphasize heightened coaching and parent education in carrying out these safety measures. While there is incredible sadness in this story, we question the merits of singling out four years of youth football amid a career of sports that lasted through high school.”