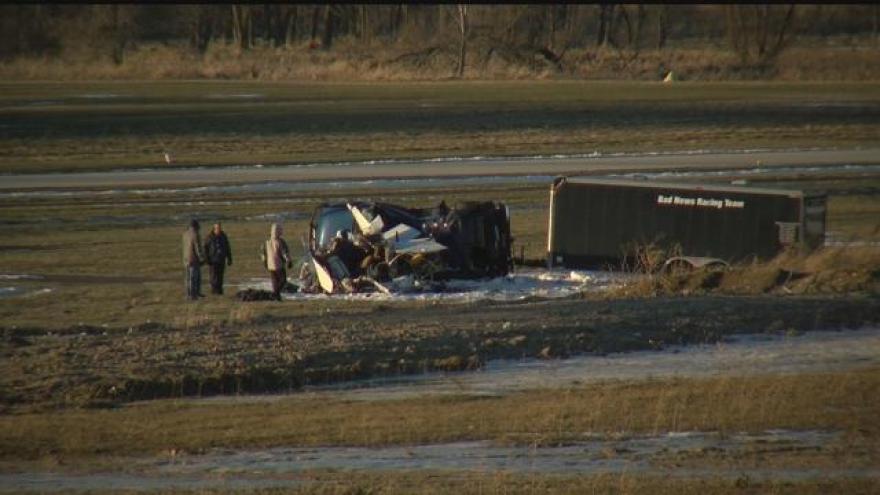 It's something no parent wants to see.

911 Operator: "And there were three people on board?"

That's the reaction from the mother of Cory Papenfuss to a 911 operator, after seeing her child inside the mangled wreckage of a plane that crashed during take-off.

"It blew off the runway," she said. "It's very windy. It blew off and then it crashed into a car."

The woman's daughter-in-law and infant grandson are also on-board. She told an operator her son was bleeding.

"The pilot's having difficulty breathing. He hit the windshield," she said.

On the scene, the scared mother isn't alone. An airport volunteer called 911 too.

"The wife is on the ground," said the man who identified himself as Dennis. "She's conscious. Looks like she's got at least one broken leg."

Authorities said the family is from Virginia. They were on their way home after a holiday visit with relatives who live in Waukesha County.

"Oh my gosh, Cory!" said the mother on the phone.

"Can you get right next to him and lay him flat on his back?" asked the operator.

"He's inside the plane still?" said the operator.

But the operator tells the volunteer it would help to get Papenfuss out of the plane and lay him on the ground.

"If you can hear me I'm going to try and straighten you out so that you can breathe a little bit better," the volunteer said to the pilot.

The ambulance arrives before the volunteer can remove him. Papenfuss is rushed to the hospital, where he would later die.

The 41-year-old was a researcher at Virginia Tech University.

His wife remains in critical condition and the baby is okay after being treated at Children's Hospital.

The federal government is investigating the cause of the crash.