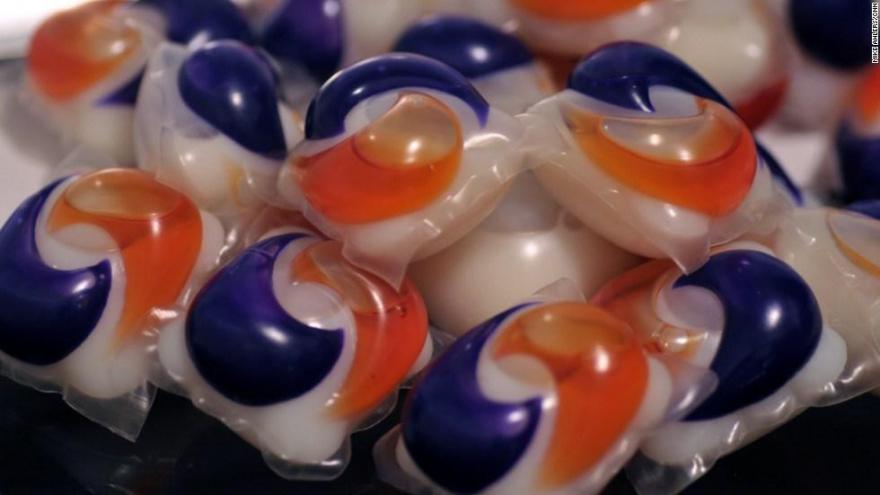 (CNN) From 2012 to 2015, the number of chemical burns to the eye linked to laundry detergent packets rose more than 30 times among young children, a new study says. More than 1,200 3- and 4-year-olds received such burns in that time period, according to the research published Thursday in the medical journal JAMA Ophthalmology.

Single-dose detergent packs, known as laundry packets or pods, entered the mass market in 2012.
"Each pod consists of a detergent mixture wrapped in a water-soluble film, made up of a proprietary polyvinyl alcohol polymer," said Eric J. Moorhead, president and principal scientist of Good Chemistry LLC, a consulting firm.
"The liquid detergent in the pods is not the same as regular liquid detergent. It has a higher concentration of surfactants, chemicals that are responsible for stain removal," said Moorhead, who was not involved in the new study. "At high concentrations, these ordinarily safe ingredients can cause irritation, especially in sensitive areas like the eyes."
Among kids between 3 and 4 years old, the number of chemical burns in the eye caused by laundry detergent packets increased from 12 instances in 2012 to 480 in 2015. Proportionally, the total chemical eye injuries associated with the packets increased from 0.8% of all burns in 2012 to 26% in 2015.
Children can injure themselves when the packets break and the contents squirt into one or both eyes, or when the contents leak onto the children's hands and they rub their eyes.
Most of these burns happened in the home, where kids are playing with the brightly colored packets, "wondering if they're toys, if they're candy," said the lead researcher, Dr. R. Sterling Haring of Johns Hopkins University. They're neither.
The detergents inside the pods "are among the worst chemicals that the eye can be exposed to," Haring said: Detergents are alkaline in nature, and alkaline burns are typically more severe than acid burns in the eye. "They penetrate deeper, they burn faster, and they are more caustic to the tissues in the eye itself."
Because the cornea doesn't have blood vessels, it doesn't heal well, so if you scar it with detergent packet chemicals, "there's a high risk of long-term vision impairment," Haring said.
"We'd done another study a few months ago that showed that small children are at highest risk for all types of chemical ocular burns, and that kind of flew in the face of conventional wisdom," he said. "They always thought that working-age men were the highest risk group: working in factories, splashing chemical in their eyes."
Instead, he and his colleagues were surprised to find that young children have a 50% higher risk than the highest-risk adult, Haring said. Once that news got out, community physicians insisted that the cause was laundry detergent packets. Haring and his team discovered that they were right. Their study concludes with recommendations that parents properly store these packets and that manufacturers consider new, redesigned packaging.
In essence, these recommendations "are already in play," said Brian Sansoni, vice president of sustainability initiatives at the American Cleaning Institute, which represents the US cleaning products industry.
He said the new study analyzed data prior to the new safety standards that were published in December 2015 by ASTM International, formerly American Society for Testing and Materials International, a non-profit that develops voluntary consensus standards for consumer manufacturers. The American Cleaning Institute helped identify proper standards for the packets.
Following publication of the safety standards, Procter & Gamble, the company that makes Gain and Tide brand laundry detergent pods, launched ad campaigns to raise awareness of the dangers and made its packaging more difficult for small children to open. Other companies also followed suit.
"Make sure you keep these products up and away from children -- like a lot of household products," said Sansoni.
Dr. Michael Grosso, chairman of the department of pediatrics and chief medical officer at Northwell Health's Huntington Hospital in Huntington, New York, said parents need to worry about these laundry packets and keep them out of the way.
"It's not only eye injuries. Children will also swallow these," said Grosso, who was not involved in the study. Eye injuries caused by the packets "can be quite serious," he added.
"The majority of individuals will recover their vision after this kind of injury," he said. However, these burns can be "very, very painful. They require extensive emergency treatment and extensive follow-up treatment by an ophthalmologist."
The first thing parents should do is "prevent this by keeping these pods out of the way. They need to be kept up high in cabinets beyond the reach of a preschool child, the group that's most at risk."
If a child does get detergent in their eye, a parent should immediately irrigate the child's eyes.
"Cool tap water, as much as possible, as soon as possible," Grosso said. "And then the very next step would be a trip to the emergency department."
Haring echoed this advice. "Take your child and put their eye under cool water under the faucet and flush it with cool water for 20 minutes," he said, noting that if the burn is extremely severe, some loss of vision could occur.
"Don't stop and take them to the hospital. Don't call and wait for an ambulance to show up. Flush the eye with cool water before you do anything else," Haring said. "That's going to be the deciding factor about long-term outcome for this injury."
Share this article: