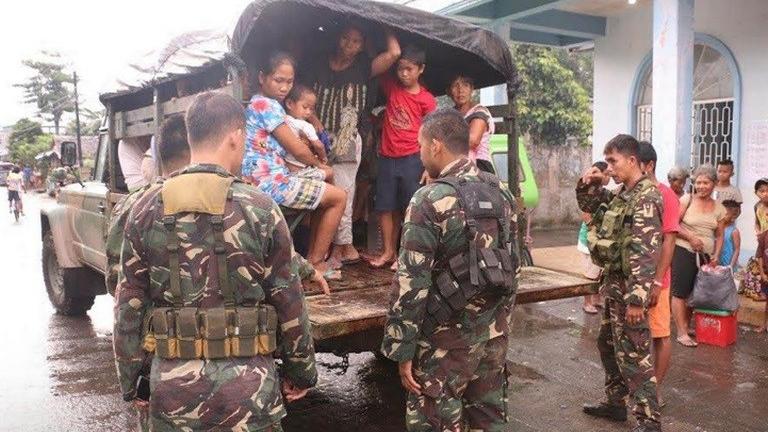 (CNN)Hundreds of thousands of people have been evacuated in the central Philippines, where a fierce storm is lashing coastal areas with heavy wind and rain.

Typhoon Melor intensified rapidly over the weekend as it moved toward the eastern island of Samar.

On Monday, it skirted along Samar's northern coast, pummeling it with maximum sustained winds as strong as 215 kph (130 mph), the equivalent of a Category 4 hurricane, according to the U.S. military's Joint Typhoon Warning Center.

The storm, known in the Philippines as Nona, also brings the threat of torrential rainfall across the heart of the Philippine archipelago, including the densely populated region around Manila, the capital.

"This is going to produce significant amounts of rain," CNN weather anchor Derek Van Dam warned. "This part of the world means we could get landslides and flooding."

After grazing Samar, the typhoon was expected to churn west over the southern tip of Luzon, the country's largest island, before barreling on toward other parts of the archipelago.The national disaster management agency said roughly 725,000 people had been preemptively evacuated, the vast majority of them in southern Luzon.

Forty domestic flights were canceled, nearly 8,000 sea travelers were stranded in ports and many schools were closed, the agency said Monday.

Situated in an area of the Western Pacific that some meteorologists describe as a "bowling alley" for tropical cyclones, the Philippines is frequently buffeted by typhoons.

The deadliest to hit the country in recent years was Super Typhoon Haiyan -- one of the most powerful storms ever to make landfall -- which left more than 7,000 people dead or missing in November 2013.

The worst of Melor's wind and rain is expected to affect areas at least 100 kilometers (60 miles) north of Tacloban, the city that was devastated by Haiyan.