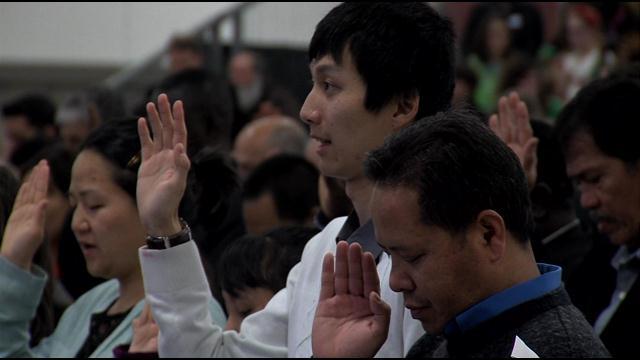 More than 200 people took the oath of allegiance to the United States Friday at State Fair Park.

The event coincided with the annual cultural event \"Holiday Folk Fair\" celebrating the many diverse cultures represented by the people who now call Wisconsin home.

At around the same time, President Barack Obama was in Las Vegas reiterating his Executive Actions regarding immigration reform.

\"We are a nation of immigrants,\" the President repeated Friday. \"That means we are constantly being replenished with strivers who believe in the American dream.\"

Under the President's directives, adults with children born in the U.S. or with permanent legal status can apply for a three year work permit.

President Obama has also instructed heightened security on the southern border that focuses on deporting those who are high risk.

Republican say any chance of passing immigration reform was shattered with the President going it alone.

\"The President has taken actions that he himself has said are those of a king or an emperor,\" said Republican Speaker of the House John Boehner.