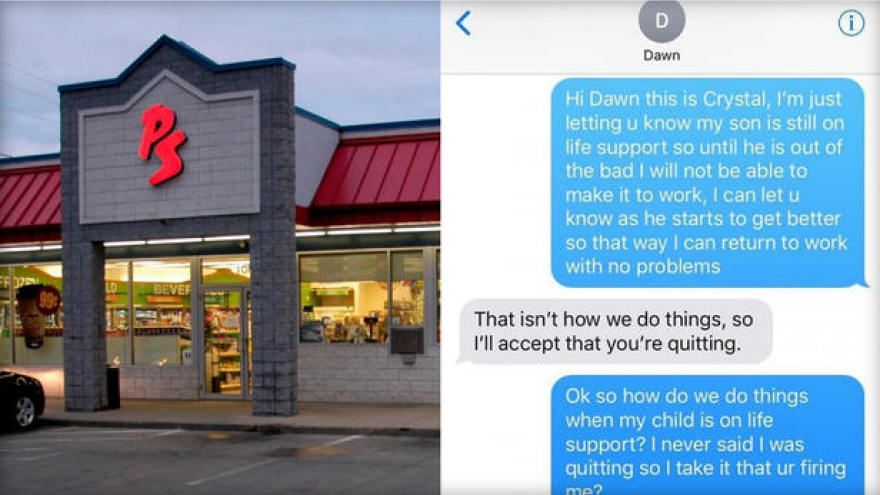 A Michigan mom shared a conversation she had with her boss over text message, and the exchange has gone viral -- with serious repercussions.

Crystal Reynolds Fisher took screenshots of her text message conversation with her boss, identified only as Dawn. Fisher tells Dawn that she cannot come to work because her son is on life support. It is unclear why Fisher's son is in the hospital or how long he will be in intensive care. She said she was notifying her manager 48 hours in advance that that she couldn't come to work because her son was in the ICU.

"I'm just letting [you] know my son is still on life support so until he is out of the bad I will not be able to make it to work," Fisher writes in the initial text to Dawn. "I can let [you] know as he starts to get better so that way I can return to work with no problems." Dawn's response shocked Fisher, as well as the nearly 80,000 people who shared her Facebook of the texts.

"That isn't how we do things, so I'll accept you're quitting," Dawn wrote back.

"Ok how do we do things when my child is on life support?" Fisher wrote. "I never said I was quitting so I take it that [you're] firing me?" Dawn told Fisher that if she can't come to work, "that's quitting." The two sent several messages back and forth after that, with Dawn adamant that she will not "tolerate drama," and that if Fisher did not show up for her shift, she would take it as her quitting.

The two work at PS Food Mart in Albion, Michigan, which is owned by Folk Oil Company. Fisher told her boss that she was going to contact corporate at Folk Oil about how she was being treated, and Dawn invited her to do so. Dawn sent Fisher a corporate number to call.

At the end of the exchange posted on Facebook, Fisher poses a question to Dawn. "Would [you] be able to go to work and function if [your] child was on life support?" she asked her boss. "Yes I would, I still have bills to pay and something to keep me busy and occupied," Dawn responded. "We don't just get to come and go as we please at Folk Oil."

After the texts went viral, Folk Oil released a statement about the conversation between Fisher and Dawn. "We investigated and have found that the situation was handled improperly and without the compassion that we value as a company. For that, we are very sorry," Folk Oil said in a statement posted on PS Food Mart's Facebook page. "As a result of this finding, we took quick action and that manager is no longer employed by PS Food Mart."