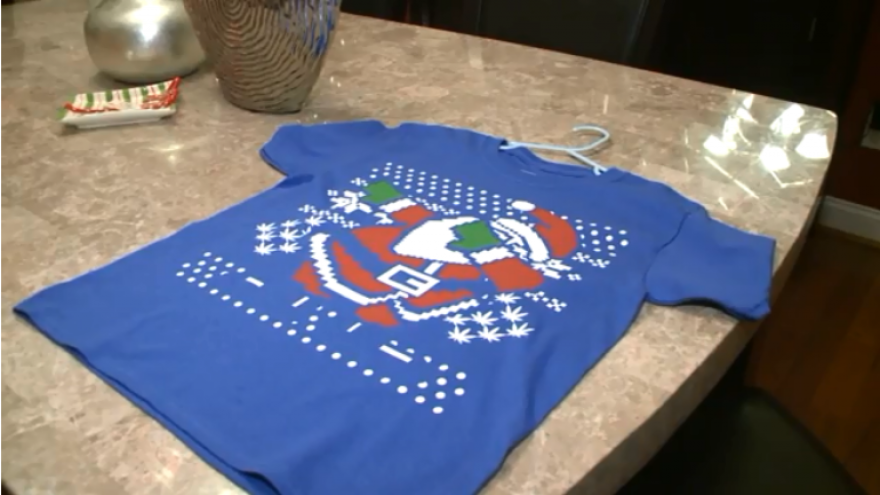 SUFFOLK, Va. - (WTKR) A Suffolk mom was caught off guard when she realized she was sending her six-year-old to school wearing a shirt with possible marijuana leaves on it.

Nicole Belote said several weeks ago she started looking online with her son for a holiday shirt. He was going to wear it to her work Christmas party and to an ugly sweater party at his elementary school.

She said he found one he loved depicting Santa doing the popular dance move "dabbing" on Walmart.com.

“Aiden got excited about it, but to me, it was some goofy dance move,” said Belote.

The dance move gained widespread popularity when Carolina Panthers Quarterback Cam Newtown did it on the football field when he celebrated.

But some people also associate the term dabbing with certain marijuana use.

Belote said when she bought it she had no idea. She said the online description stated it was a kids' shirt with Santa dabbing, but made no mention of marijuana leaves.

Weeks after she bought it, Belote pulled it out to iron it and realized when she looked closely there were possible marijuana leaves on it.

She said she had to break the news to her six-year-old that the shirt depicted something illegal on it and he couldn’t wear it school or the party. He was upset at first.

“He shared with everybody - including his teachers - the next day that he couldn't wear the shirt that mommy bought him because it had a picture of leaves that were illegal,” said Belote.

News 3 reached out to Walmart.com, who would only say that this item is no longer available on their site.

Many people didn't notice anything wrong with the shirt at first glance.

“I don't think I would've noticed it if it wasn't pointed out,” said Howard Vass, a local resident.

“I missed it obviously when I ordered it and we held it up and looked at it. It wasn't until I really looked close to it that I noticed the issue,” said Belote.

Many we spoke to said marijuana is not something that should be on a kids' shirt.

“I wouldn't want my kid labeled as a pothead,” said Dennis Bandy, a local resident.

Belote said it was disappointing, but she found her son another shirt and she appreciates Walmart taking it off their website.

“It was a bit entertaining. We will never forget the story,” said Belote.

She said she plans to tell the story at future holidays when her son is a little bit older.