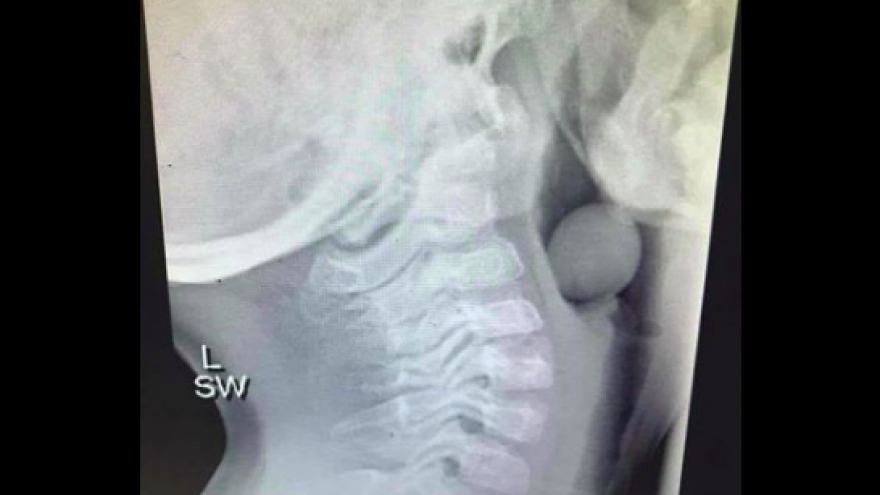 (CBS NEWS)  A mom shared a shocking X-ray image of a large grape lodged in a 5-year-old boy’s throat to send a reminder to parents -- not all kids chew their food.

Angela Henderson, author of “Finlee and Me,” a popular parenting blog in Australia, shared the photo on her Facebook page earlier this month and it went viral with more than 26,000 shares.

“Do you know what this X-ray is of? A grape!” she wrote, reminding parents to cut their young children’s food into smaller pieces. “A grape that was lodged in the top of a 5-year-old’s airway today.”

Henderson said a pediatrician sent her the image, hoping she would share it with her nearly 70,000 followers as a reminder for parents, especially of those with children 5 and under, about the dangers of choking.

The young boy, who has yet to be identified, had to be operated on, under general anesthesia, to remove the grape, Henderson said.

Thousands of followers commented on Henderson’s post to offer their own advice.

“As a former paramedic -- grapes and hot dogs are the worst for lodging in throats, but anything soft and circular can be deadly,” one Facebook user said. “I always encourage anyone I see feeding young kids soft, circular items, to cut the food in half.”

“Also hard boiled eggs the yellow affects older people with esophagus being smaller than others,” another added.

However, some questioned the authenticity of the X-ray image, claiming it was Photoshopped -- but that suggestion was quickly shot down.

“As a Radiologic Technologist, I can tell you that yes, if you are using techniques to show soft tissue, then a grape would show up on an X-ray,” one woman said. “I once did a film on a small child who had swallowed a pop-top tab, and with soft tissue techniques was able to visualize that small piece of aluminum for his physician.”

Regardless, most users agreed it’s still an important reminder.

According to the National Safety Council, choking is the fourth-leading cause of unintentional injury death and one of the leading causes of unintentional death for infants. At least one child dies from choking on food every five days in the U.S., and more than 12,000 children are taken to a hospital emergency room each year for food-choking injuries, the New York State Department of Health reports.

Hot dogs, popcorn, candy, raw vegetables, ice cubes, peanut butter and ice cubes are among the foods listed as a choking hazard for kids. Whole grapes also made the list.

Doctors in Scotland used a 2016 report to warn people that grapes can be a choking hazard. The two authors of the study, Dr. Jamie Cooper and colleague Dr. Amy Lumsden, described three choking cases -- two of them fatal -- that involved boys aged 5 and younger who were eating whole grapes.

“While there are plenty of warnings on the packaging of small toys about the potential choking hazard they represent, no such warnings are available on foodstuffs, such as grapes and cherry tomatoes,” the report reads.

Grapes tend to be larger than a young child’s airway, and the smooth soft surface of a grape can form a tight seal in an airway. This not only blocks the airway but also makes it more difficult to remove the grape without special equipment, authors of the study explained.

Both grapes and cherry tomatoes “should be chopped in half and ideally quartered before being given to young children [aged 5 and under],” they concluded.