Mom: Note about boy with disabilities says "keep your son away from ours" 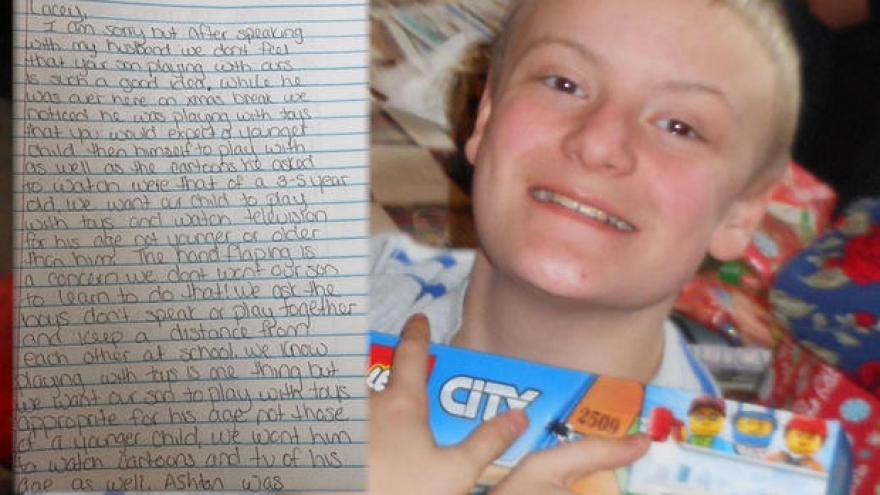 A mother in Des Moines, Iowa, is making national headlines after posting images of a letter she says her son received from a parent telling him he was not a good influence. The letter also mentioned that the mother should keep her son away from others.

Lacey Brandenburg took to Facebook to explain the situation and it immediately went viral after she posted the letter Thursday morning, according to CBS affiliate KCCI-TV. Her son has intellectual disabilities, autism, cognitive disorder and ADHD.

The unknown parent wrote in the letter that the son played with toys and watched television created for "a younger child."

"We want our child to play with toys and watch television for his age, not younger or older than him," the letter stated. "The hand flaping [sic] is a concern. We don't want our son to learn to do that!"

The parent continued writing: "I know he has a disability, but we feel his disability may hold our son's level of comperhansion [sic], life, his communication, socialization, and learning level may be at risk if playing and being around Ashton continues."

"I couldn't believe somebody would go as far as downing a special needs kid just because he does things a little differently," she said.

Although the letter mentioned Ashton was well-behaved, it ended by saying: "Please keep your son away from ours so ours are not picking up the idea that playing with toys or watching cartoons younger than his is OK."

Brandenburg said her intent on sharing the letter was to "teach people what parents with special needs face and what they deal with."

As a result, there has been an outpouring of support for her, and Ashton said he has made new friends, KCCI-TV writes.

"I feel pretty good right now," Brandenburg said. "I don't think I'm in the wrong for posting it."