MLB player lives in a van behind Florida Wal-Mart 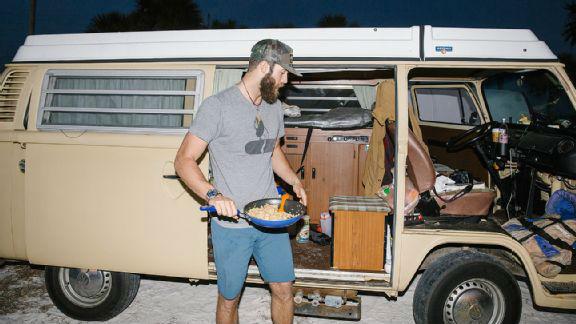 (CBS NEWS) It's March and that can only mean one thing for baseball fans - a scouting report on the eye-popping cars that players take to spring training.

And Blue Jays pitcher Daniel Norris opts for a 1978 Volkswagon van ... that he lives in.

Yes, the left-hander with a $2 million signing bonus lives in a camper behind a Wal-Mart in Florida.

The Johnson City, Tennessee native told ESPN that he bought the van for $10,000 as a way to escape the pressure cooker of Major League Baseball.

\"It's like a yin-and-yang thing for me,\" he told ESPN. \"I'm not going to change who I am just because people think it's weird. The only way I'm going to have a great season is by starting out happy and balanced and continuing to be me. It might be unconventional, but to feel good about life I need to have some adventure.\"

The 21-year-old Norris made his major-league debut last September and is hoping to earn a spot in the Jays rotation this spring. Last season, he led all of the minor leagues in strikeouts per nine innings.

And while Norris may be making headlines for his unconventional lifestyle, he told Baseball America that his focus remains on his career.

\"Baseball's been my No. 1 passion my whole life,\" Norris said. \"All the stuff with the van is cool and (a good story) and that's fine, but baseball is my main focus. That's my main passion and what I think about the most.\"

So far, so good. In his first start of the spring on Thursday, Norris pitched 1 2/3 scoreless innings and struck out two batters.

Then he went back to his van for a good night's sleep.