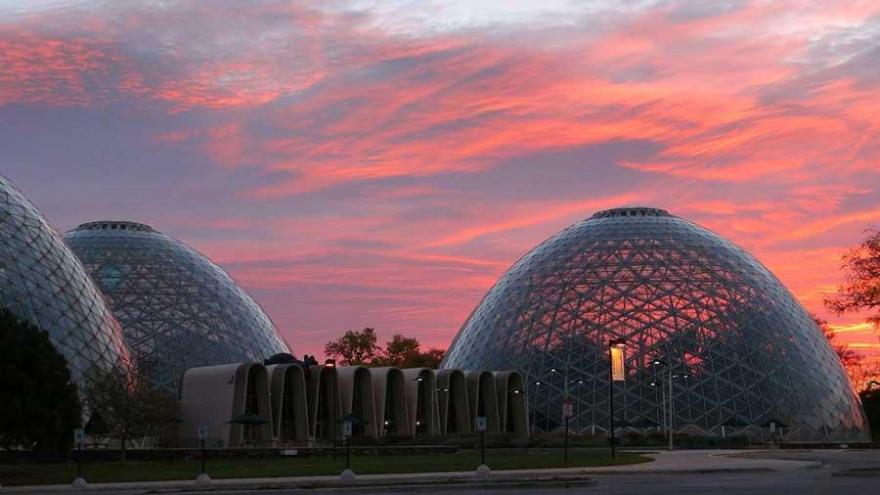 Milwaukee's Mitchell Park Domes was named a National Treasure by the National Trust for Historic Preservation on Wednesday. The Trust is also releasing a new engineering report that presents an idea for how to preserve the Domes.

"Anyone who has visited the Milwaukee Domes can appreciate what a stunning and absolutely one-of-a-kind place they are," said Stephanie Meeks, president and CEO of the National Trust for Historic Preservation.

Officially called the Mitchell Park Horticultural Conservatory, “The Domes” are more than 50 years old. Over the years, water leakage occurred and pieces of concrete began to fall off. Workers installed netting to catch the pieces.

This situation landed the Milwaukee Domes on the National Trust's 2016 list of America's 11 Most Endangered Historic Places.

The county discussed many options and demolition has come up, meanwhile a private agency conducted a report to find ways to preserve the domes.

"Based on our observations and experience with similar structures, it is our opinion that the Domes can be preserved and restored," WJE's report stated. "The Mitchell Park Horticultural Conservatory Domes are unique, architecturally significant structures that have performed well during their first fifty-eight years of service and can be preserved. The condition of the precast concrete framing and glass cladding are repairable, and replacement of these systems is not necessary at this time."

The Trust and Milwaukee Preservation Alliance are launching a coordinated campaign to rally the public in support of a preservation solution for the Domes. They will also present a plan to preserve the Domes that would be approximately $18.6 million, around one-third the cost of the full rehab option developed by GRAEF Consulting for the County.

The Domes are known to represent modern engineering and architecture featuring the world’s first “conoidal” or cone-shaped-domes. Generations of Milwaukeeans, as well as thousands of people from throughout the world, visit the Domes annually.

"It's hard to imagine Milwaukee without the Domes," said Peter Zanghi, President of the Milwaukee Preservation Alliance. "For those who grew up in Wisconsin, the Domes are a landmark that contribute to Milwaukee's unique identity.