Miss Lebanon distances herself from photo with Miss Israel 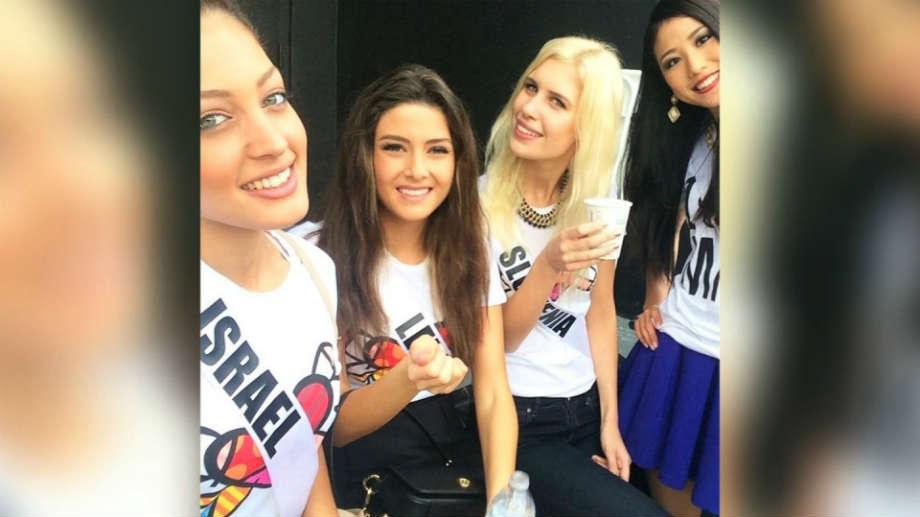 (CNN) -- Miss Lebanon Saly Greige is distancing herself from a photo of her and Miss Israel Doron Matalon that's causing an online uproar.

The Miss Universe Organization defended the women and the picture, saying it was \"unfortunate\" that the picture has been perceived in a negative light.

\"At an event with one of our charitable partners, Miss Universe Lebanon and Miss Universe Israel innocently ended up in an impromptu photo together, which was then posted on Instagram,\" the organization said in a statement to CNN.

\"It is unfortunate to know a photo of four smiling women from different parts of the world, working together at an event, could be misconstrued as anything other than what it is, a celebration of universal friendship, which the Miss Universe pageant is all about.\"

The picture appeared on Matalon's Instagram feed on January 11. It shows Matalon smiling with Greige, Miss Slovenia and Miss Japan in Miami, where the Miss Universe pageant will take place on Wednesday.

\"Good morning from us!\" reads the caption.

The image ignited a wide-ranging debate in the comments of the picture about the ongoing conflict between Israel and much of the Arab world.

Greige addressed the controversy in a statement on her Facebook page Saturday, explaining what she called \"the truth behind the photo.\"

From the start of pageant preparations, Greige said, she was \"very cautious to avoid being in any photo or communication with Miss Israel.\"

As she explains it, she was posing for a photo with Miss Japan and Miss Slovenia when \"suddenly Miss Israel jumped in, took a selfie, and put it on her social media,\" she said.

Matalon weighed in Sunday after a website posted an article with the headline \"Miss Lebanon in Trouble.\" She took a screenshot of the article and captioned it, \"It doesn't surprise me, but it still makes me sad,\" and posted it on her social media accounts.

\"Too bad you can not put the hostility out of the game, only for three weeks of an experience of a lifetime that we can meet girls from around the world and also from the neighboring country.\"

Comments on her original photo echoed the sentiment.

\"As a Lebanese, I really don't see anything wrong with this picture. It's time we promote peace over violence as the latter has gotten us no where. And if you really wanna discuss politics, it surely shouldn't be under the picture of 4 beautiful ladies who have nothing to do with your b******t. Good luck ladies!\"

It's not the first time beauty pageants have been caught up in political controversy. According to multiple news reports, former Miss Lebanon Christina Sawaya pulled out of Miss Universe 2002 because she did not want to share the stage with Miss Israel amid tensions in the Middle East.

\"The Miss Universe pageant has always been a celebration of different cultures, welcoming women from all around the globe. It provides an opportunity for the participants to see just how much they have in common,\" the organization said.

\"With 88 women from around the world coming together for the Miss Universe pageant, new friendships are forged and we hope that these relationships can make inroads for change in the future.\"