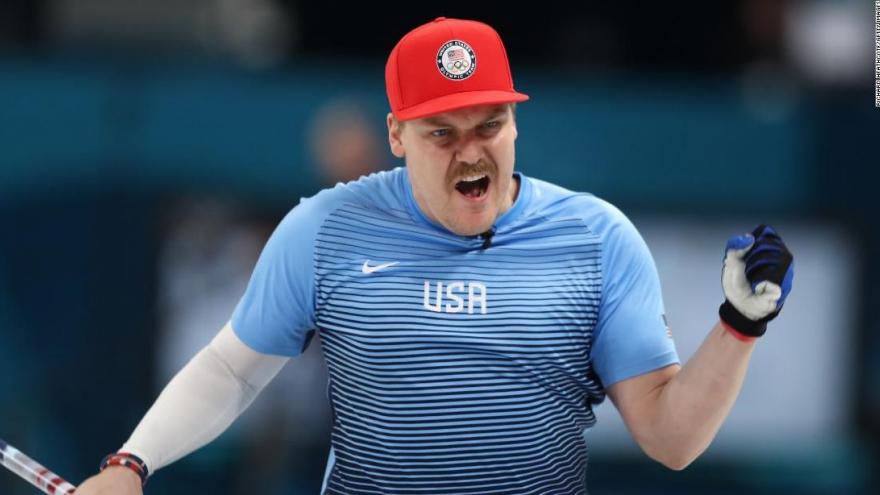 (CNN)The US men's curling team, once known as "The Rejects," pulled off one the great upsets of the PyeongChang Olympics by beating favorites Sweden 10-7 to clinch an historic gold medal.

Team USA had only won a bronze in men's curling since the sport was reintroduced to the Games in 1998, and skip John Shuster's side was considered a long-shot to beat the top-ranked Swedish team, having lost to them 10-4 in the group stages.

But the resurgent US quartet had beaten defending champion Canada 5-3 in the semi-final, and in front of a crowd which included Ivanka Trump and Swedish King Carl Gustaf, they outplayed their opponents to secure USA's ninth gold of these Winter Games.

"We've played our best when our backs were up against the wall," said Tyler George, the USA vice skip.

"We took it to another level this week. Usually we're fighting and scrapping to get into the playoffs but for five days we were the best team in the world and we did it at the right time.

"We always knew we had it in us, but to do it when it matters most is what I'm most proud of overall."

Shuster, 35, was a member of the bronze-medal winning side from Turin in 2006, but disappointing performances in Vancouver in 2010 and Sochi in 2014 meant he was dropped from USA Curling's national high-performance program four years ago, according to the New York Times.

He responded by losing 35 pounds and starting up his own team, which soon earned the nickname "The Rejects."

"From the day the 2014 Olympics came to an end, every single day was with this journey in mind," said Shuster, adding he was inspired by the tale of US speed skating great Dan Jansen who broke a 10-year curse to finally win Olympic gold in his last race at Lillehammer in 1994.

"Time and time again, he got back up and he wrote his story, and he's an Olympic champion. I'm so proud that I was able to do something similar."

The team of Shuster, George, Matt Hamilton and John Landsteiner, with alternate Joe Polo -- another bronze medalist from Turin -- were ranked 13th in the world ahead of the Games and they made a slow start to the competition before winning four straight matches to reach the final.

Against Sweden, skipped by Sochi silver medalist Niklas Edin, the USA were locked at 5-5 after seven of 10 ends but Shuster's men scored five in the eighth end to open up a huge gap.

The Swedes achieved a double to narrow the score to 10-7 but shook hands during the final end with the situation irretrievable.

"The Rejects are Olympic champions. Call it the Miracurl on Ice," said US newspaper USA Today.

BBC's curling commentator Steve Cram said: "America have thoroughly deserved this, they deserve all the plaudits they've got. Who'd have thought it though - gold for the USA, silver for Sweden, bronze for Switzerland - and Canada miss out."

Mr. T, the actor best known for playing B.A. Baracus in the 1980s hit series "The A Team" tweeted he was "proud" of the team, signing off with the hashtag "curling is cool fool."

The USA women's curlers have yet to win a medal at a Winter Olympics and finished eighth of 10 teams in Pyeongchang.